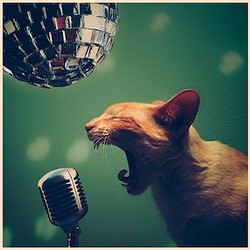 Yeah, the Seaside’s closing, but there are still a few great shows coming up — a few of which are this weekend.

Hit up the Seaside tonight for two great shows: The early show features the Young Professionals, Crickets of Cascadia and Seattle's Barcelona. The band, which plays swelling songs for the Coldplay crowd, attracts a big audience each time they come through town. Since they were last here, Barcelona got signed to a major label and left. So there's a lot of catching up to do. Starts at 7 pm. $10. All-ages.

Stick around (if you're 21) for the late show, too. Jaeda, a local female emcee who took one of our "Bands to Watch" crowns this year, is bringing some of her favorite acts to town: D.Dove (another amazing female rapper from Southern California), Social Green (a psychedelic, seven-piece ska band) and Empty Pockets (lyrical hip-hop). Kicks off at 9 pm. Five bucks.

Kaylee Cole, Dead Serious Lovers and Reverb, Adam Breeden's (of Oil of Angels) spinoff project, takes the Empyrean stage tonight at 8 pm. And in case you don't know who Dead Serious Lovers is, that's the new name for Wolfgang — the musical project of Vaughn Wood and Henry Nordstrom. All-ages. $8.

And for something completely different, hit up the Viking for a show by 6 Foot Swing. It's Oktoberfest, too. They play from 8-11 pm, and there's no cover.

Some of you will totally ho out and try to win over Bret Michaels at the Casino. I say skip that, put on your dancing shoes and hit up the Lion's Lair for a show with alt-country band Silver Treason and rockers the Camaros. 9:30 pm. $5. Gotta be 21.

For those more inclined to things a little more demonic, hit the Seaside for Odyssey, Age of Nefilim, Testament of the Wicked and Ohio Match Hellbillys. Definitely bring earplugs. 8 pm. $5. Gotta be 21.

No decision on Creach shooting before election

Protest at Lewiston for oversized loads