Hot: Living Through the Next Fifty Years on Earth, by Mark Hertsgaard (Houghton Mifflin Harcourt, 350 pages, Jan. 19)
As a catchphrase, "global warming" gained currency in June 1988, when a NASA scientist warned the U.S. Senate and the New York Times put the story on its front page. We haven't done nearly enough since then — we've mostly been in denial — but Hertsgaard goes beyond doom-saying to outline the long-term planning that has been accomplished.

The Death Instinct, by Jed Rubenfeld (Riverhead, 460 pages, Jan. 20)
A historical novel that's a follow-up to Rubenfeld's The Interpretation of Murder (2007), which was set in 1909 New York and starred Freud, Jung, and one of Freud's disciples. His latest focuses on the 1920 Wall Street bombing, a terrorist precursor to 9/11. Marie Curie even makes an appearance. If you liked Caleb Carr's The Alienist (1994) — I know I did — you'll like the mix of psychology, crime and historical figures here.

A Palace in the Old Village, by Tahar Ben Jelloun (Penguin, 190 pages, Jan. 25)
An elderly Moroccan immigrant to France returns to Morocco, builds a big house, and waits, fruitlessly, for his assimilated-to-France adult children to return to him. Jelloun, 67, has taught and written in French for the last 40 years. --- 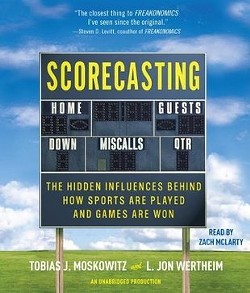 Scorecasting: The Hidden Influences Behind How Sports Are Played and Games Are Won, by Tobias Moskowitz and L. Jon Wertheim (Crown, 280 pages, Jan. 25)
Home teams tend to win because their fans' screaming biases the referees. Punting on fourth down is usually a bad idea. Blocking shots into the fourth row doesn't help your team all that much. When the count's 0-2, the strike zone shrinks. Read this combination of Freakonomics and Moneyball and rid yourself of conventional sports "wisdom."

Known and Unknown: A Memoir, by Donald Rumsfeld (Sentinel, 830 pages, Feb. 8)
There were things, to him unknown, that should have been known. Rummy dithered and people died.

Mr. Chartwell, by Rebecca Hunt (The Dial Press, 250 pages, Feb. 8)
In 1964, a widowed London librarian rents a room to a tenant who turns out to be ... a big, black, talking dog. Hold on — it's a metaphor. Because this is a psychological novel about depression. And in 1964, Winston Churchill was about to retire, having been plagued for years by what he referred to as the Black Dog of Depression.

We, the Drowned, by Carsten Jensen (Houghton Mifflin Harcourt, 680 pages, Feb. 9)
Tales spanning two centuries of the sailing men from a small town in Denmark — their cowardice and bravery, and the women back home who sustain them. The novel's multiple narrators create an epic story ending with World War II.

History of a Suicide: My Sister's Unfinished Life, by Jill Bialosky (Atria, 270 pages, Feb. 15)
Kim killed herself 20 years ago. Now Jill Bialosky has used the techniques of literary nonfiction — diaries mixed with the work of psychologists and poets — to investigate family, parenting, guilt, and the ravaging effects of suicide on those who are left behind.

The Old Romantic, by Louise Dean (Riverhead, 350 pages, Feb. 17)
Dad's in his 80s and dying. His dutiful son tries to reunite the family, which includes the eccentric wife (divorced 25 years before) and the scapegoated, estranged son. What results is a profanity-laced family dinner and road trip. A very British novel.

The Night Season, by Chelsea Cain (Minotaur, 330 pages, March 1)
Fourth in the series of detective novels set in Portland. Cain parallels a 1948 flood with the strange cause of death for four murder victims whose bodies were plucked from the black waters of the Willamette.