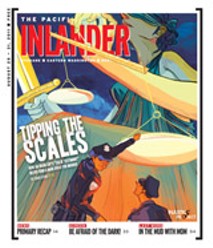 Idaho State Police found that Officer Fred Rice did not lie in his testimony during a 2006 murder trial. The Inlander wrote about Fred Rice in an Aug. 25 article.

Idaho Police Captain G. Jerry Russell says Rice did not lie in testifying against Jonathan Ellington, the Spokesman-Review reports. Ellington was convicted of second-degree murder and aggravated assault for a New Year's Day 2006 altercation that ended with a woman dead.

The Idaho Supreme Court in May had reversed Ellington's conviction because Rice "very likely" perjured himself in the trial. The court says Rice's description of the crash was contradicted by testimony he had given in earlier cases.

Russell says Rice will be back at work "shortly."