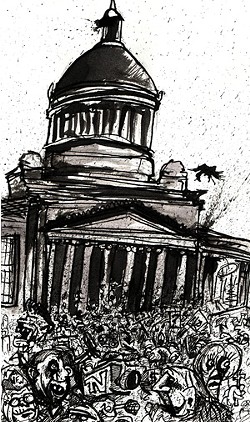 Since the legislative special session began Monday in Olympia, protesters with the Occupy movement have been pretty successful in being heard and seen in and out of the rotunda. They've even been pretty good at shutting down some meetings.

Their beef is with the draconian cuts being made to the state's social services — without the help of any new tax revenue.

Lisa Brown, the state senate's leader, who represents Spokane, is no stranger to organized people getting heard. In fact, she teaches a class on such things at Gonzaga. So it's no surprise she empathizes with — even supports — the folks rallying in the state's capital.

Today, she put out a statement on the Occupiers:

Yesterday in the Senate Ways & Means Committee hearing, we saw a dramatic and heartfelt expression of the frustrations and fears of Washingtonians in the face of the economic crisis that has swept across the globe, our nation and our state.

These are desperate times. Many Washingtonians have lost jobs and can’t find work. Others, who still have jobs, are being paid less for their work while being charged more for health insurance. And many of them pay more in taxes than some of our largest corporations.

This is not fair or just, and the people know it. They have come to express their frustration over that injustice, and they have every right to speak out. As Americans with righteous convictions about our most fundamental and important values, I would even say they have a duty to speak out.

We want to hear them and we want to make sure their needs and values help shape our budget and our choices as we search for solutions to this crisis. But to hear them — to fully hear their concerns and to be able to address their needs, we need a civil, open process.

Yesterday our Ways & Means chairman, Sen. Ed Murray, argued for that process. I was pleased to see a majority of demonstrators seem to agree with him and disappointed that a vocal few did not.

I welcome the passionate expression of free speech, today and every day. And I look forward to hearing that expression and working together for solutions that truly serve the needs of our people and our state.

A federal judge delayed sentencing for Kevin Harpham in a hearing on Wednesday.

Harpham was supposed to have been sentenced to between 27 and 32 years in prison for planting a pipe bomb along the route of Spokane's annual Martin Luther King Jr. Day parade.

The 37-year-old Addy resident pled guilty in December to attempted use of a weapon of mass destruction and to targeting parade marchers because of their race.

Quackenbush says that the delay was to allow for research into the meaning of "explosive device," which defense attorneys have argued is not spelled out in U.S. Code. 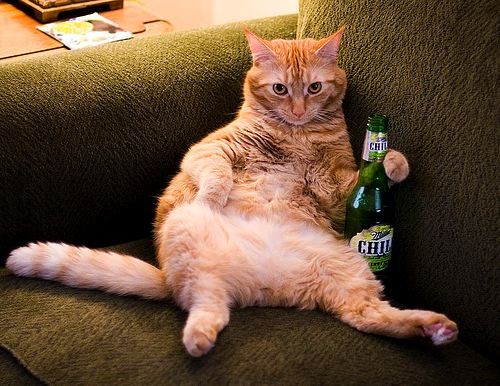 Each Wednesday on Bloglander, we give you a taste of happy hours going on at bars around town that night. (Read previous posts.)

True Legends Grill, in Liberty Lake, serves up happy hour from 3-6 pm. Specials include: $5 mini pizzas and $.50 off all wells and drafts.

The 7th Rail, in north Spokane, ushers in happy hour from 4-7 pm. Specials include: $.50 off all drinks.

The Backroads, in north Spokane, serves up happy hour from 4-6 pm. Specials include: $2 wells whiskey, $4 Fireball, and $1 off every whiskey in the bar.

WSU football coach gets sacked — Paul Wolff was fired with a year left on his five-year contract. (KXLY) (KREM scouts out his potential replacements)

Everything you need to know about Facebook's $100B IPO (Mashable)

Finally, central banks do something in the European crisis (Telegraph)

Is your phone telling your carrier everything you do? (Gigaom)

As Washington state legislators struck the gavel Monday to begin the special session called by the governor, an estimated 3,000 people rallied around the capital building, protesting further cuts to social services provided by the state.

Later, as hearings were beginning to look into ways to cut $2 billion from the state's budget, protesters with the Occupy movement filled the capital building's rotunda, shutting a budget meeting down and leading to their arrests.

But before things got ugly and state troopers dragged protestors out one by one, Brian Zylstra, blogging for Secretary of State Sam Reed, gave his readers a taste of the action — with some snarky commentary.

"Like all good protesters, they brought with them lots of chants," Zylstra wrote on Reed's blog, From Our Corner. "Some were catchy, but a few sounded clunky and needed some work."

Aside from the usual Occupy chants about being the 99 percent and getting sold out by banks, the protesters provided Zylstra an opportunity for some comic relief:

"Can't you hear us?" they chanted, to which Zylstra replied, "From our nearby office, YES!"

And, when protesters chanted, “Occupy," Zylstra added, "With Thanksgiving apparently still on his mind, one co-worker here thought they were yelling, 'Pumpkin pie!'"

With a few weeks left in the session, we wonder if Zylstra will occupy us with more of his jokes. Or, if they'll wear thin.

I wrote last week about Michael Korpi, Jr., the classically trained violinist I first saw outside a deserted River Park Square one random night in October. Mr. Korpi has since posted a rendition of OneRepublic's "Apologize" on YouTube (see below). While the Whitworth student appears to be headless for most of the video, you can watch how he uses an effects pedal to loop his violin melodies and then play percussion or counter-melodies over it the loop. Awesome stuff.

MORNING BRIEFING: Fair play, or putting on a play?

New details on the backpack bomber — Including how he got so racist. Harpham will be sentenced on Thursday. (KHQ)

Shooting victim was an aspiring rapper — Jose "Junior" Solis was in Spokane from Moses Lake to see a rap concert at Ichiban on Saturday night, when he was fatally shot at the Quality Inn. (SR)

Brownesies, move your cars — Leaf pickup in Browne's Addition begins at 9 am this morning. If you live in the neighborhood and your car is on a north-south street, it might get towed. (They'll do east-west streets tomorrow.) (KREM)

Oh, I'm sorry, were you trying to legislate? — Protestors in Olympia disrupted the first day of the special legislative session (Seattle Times)

TONIGHT: The Chariot at A Club (bring protection)

Humans are getting ... less violent? (NYT)

Did Cincinnati Bengal Jerome Simpson get pushed, or was he faking it, soccer-style? Bring in the physicists... (Wired)

Wanna get away? Check out the world's most unusual beaches (Lonely Planet)

Stephen Colbert interviews astronomer Neil deGrasse Tyson (it's 84 minutes long, and Colbert is out of character, but it's a good one)

Many Detroit Lions fans were so upset that Nickelback would be the halftime performer for the big home game on Thanksgiving Day that they attempted to get the band kicked off the bill. Soul singer and Detroit native Mayer Hawthorne was unsuccessful in his campaign to replace Nickelback so he broadcast is own alternative halftime show from his parents’ house. (Rolling Stone)

British indie rockers Elbow were selected to write an original piece of music for the BBC’s media coverage of the upcoming 2012 Olympic games in London. (Under the Radar)

Adele's Live At The Royal Albert Hall CD/DVD combo is out this week … in time to make it under the Christmas tree in a few weeks. You can stream the album today at Pretty Much Amazing

Browne's Addition residents: Move your cars, or else

Leaf pickup trucks will be sweeping through Browne's Addition starting Tuesday, and the city says cars parked on the streets during sweeping will be towed.

The towing is necessary because the large trucks used for the leaf collection won't be able to clear the neighborhood's narrow streets. Clearing will start at 9 am each day.

Seconds Of Beauty - 1st round compilation from The Beauty Of A Second on Vimeo.