Each Wednesday on Bloglander, we give you a taste of happyhours going on at bars around town that night. (Read previous posts.)

The Safari Room, downtown in the Davenport Hotel, serves up happy hour from 4-6 pm. Specials include: half off all drinks and half off flat breads.

Big Sky, in north Spokane, ushers in happy hour from 4-7 pm. Specials include: $1 off all pitchers.

Brown Derby Tavern, in north Spokane, serves up happy hour from 4-6 pm. Specials include: $.50 off all drafts and $2 select cans of beer.

I did something positively retro last week: I watched Saturday Night Live.

This is not a normal ritual. But the sudden outpouring of buzz over Saturday Night Live (it was good again, the Internet raved) inspired me to tune in. What I saw was one absolutely brilliant sketch (a riff on Punk’d with Maya Angelou), a few solid sketches (Barack Obama as Bill Cosby, a Sports Panel highlighting the double-standard over racist comments about Jeremy Lin, and the always-decent Weekend Update) and the rest was typically sorta-cringy Saturday Night Live comedy.

But for this show, that’s awesome. That’s the very best we can hope for. We tend to view SNL through a lens of Best-of-Cast-Member video nostalgia. But take almost any era of the show, and — guaranteed — a lot of the average episode is crap. A decade from now, surely, we’ll be remembering the good old days of “Jack Sparrow” and “that one sketch about Maya Angelou.”

The constraints of the format almost always churn out mostly mediocrity.

Yet, it also finds great comic talent — the minds behind the best talk shows, behind 30 Rock, stars of Parks and Recreation. Saturday Night Live gave us The Three Amigos, and for that, we are eternally in its debt.

Yet, I think, with a few changes, the show itself could be more consistently decent.

1. Slash the total runtime. Maybe “90 minutes” is so inherent to the Saturday Night Live formula that it could never be changed. But this requirement — write 90 minutes' worth of material — seems to be the biggest millstone weighing down the show. There’s a reason most television comedy is 30 minutes. There’s a reason the two best talk shows — The Daily Show and Colbert — are only a half-hour.

Pacing. Saturday Night Live often has two or three decent sketches and then ends the night with the leftovers. There’s no reason not to trim the show length; just trim the worst sketches.

2. Shorter, sweeter sketches. It’s long been the complaint about Saturday Night Live: There are very few reasons to have a 10-minute sketch around one premise. Yet, the long drags of sketches continue. Maybe it’s because of the investment in sets and makeup. But if a sketch doesn’t constantly have twists or new points of comedy — if it’s just a variation on the same joke — the length actually hurts it.

4. More pre-taped sketches. Of course, to provide time for set changes and make-up changes between shorter live sketches, pre-taped sketches could fill the void. Nearly every great recent Saturday Night Live sketch has been pre-taped. Today’s audience has grown up familiar with YouTube, Funny or Die, and movie-style comedies on TV, instead of live studio-audience comedy. There’s not much Saturday Night Live actually gains from being live, except the nod to nostalgia.

5. Outsource pre-taped sketches. Similarly, just as Letterman brings on up-and-coming comics, SNL should hire some of the best YouTube sketch comics (like Barats and Bereta) to submit exclusive sketches for the show. It would continue the tradition of SNL being a place that uplifts some of the best comic minds.

6. Kill the “party quirks” sketches. It worked because it was not just “Here’s an impression of Cornel West at a party.” It was “here are clever impressions on top of a delightfully absurd contrast of a premise.” Many SNL sketches seem to create a character, and then just put them on a talk show or at a party. That premise is done, somehow without any preparation, much better by the Whose Line is it Anyways guys. They’re characters hanging out together at a party or giving a newscast.  It’s amusing on Who’s Line for three to five minutes.

But for an actual, prepared sketch show, putting zany characters together is just the foundation of the sketch. It’s the first step. You’ve created the characters, given them impressions — now have them do something. Give them some sort of action. (Greeting each other and catching up does not count.)

It’s a big problem with most Saturday Night Live sketches. There’s a lot of time, a lot of dialogue, a lot of character impressions. But there’s not much actually happening. And movement, whether from editing, jokes, twists or sketch length, is perhaps the most foundational element of good sketch comedy.

The state Human Rights Commission hasn't received any paperwork from former Spokane Police Officer Brad Thoma to withdraw his complaint against the city, according to the commission.

"He hasn't given paperwork. He may have requested it, though," Laura Lindstrand, a policy analyst for commission, told The Inlander this afternoon. "It is still an ongoing investigation at this time."

The Spokane City Council last night voted to rejecta settlement that would have reinstated Thoma to the police force andawarded him over $275,000 in back pay. Thoma left the force afterdriving drunk while off duty, hitting another vehicle and leaving thescene of the accident.

Lindstrand says that if Thoma in fact asked for his complaint to be withdrawn, the commission would have to vote at the end of March to terminate the investigation.

The city has not heard from the commission since media reports stated that Thoma was withdrawing his complaint, city spokeswoman Marlene Feist said earlier today.

Pinsky’s work as a poet, essayist, literary critic and translator has earned praise for its wild musical energy and ambitious range. The esteemed poet will read from his latest volume of poetry Selected Poems and the acclaimed volume The Figure Wheel: New and Collected Poems.

Listen to the reading tonight at 7:30 pm in the Cataldo Globe Room. Pinsky will also read during the annual Wire Harp/Lit Live! on Feb. 29 at 11:30 am at Spokane Falls Community College sn-w’ey’-mn auditorium.

Yes, Deer Park and Riverside will rerun their levies

Deer Park and Riverside school districts both failed to pass their levies this month, a result that could have devastating consequences for their budgets. (Money from levies and levy-equalization money makes up about 30 percent of the Deer Park school district's budget, and 22 percent of Riverside's budget.)

Fortunately, they have one more chance: On April 17, both school districts get one more shot.

This time, they hope things will be different. Riverside had attempted to pass two levies at the same time — a capital levy and a maintenance and operations levy — and it failed to get even 40 percent support from voters.

But this time Roberta Kramer, superintendent of the Riverside, says the district will only run one levy — the maintenance and operations levy at $3.42 per $1,000 of assessed value — and worry about capital projects later.

Becky Cooke, superintendent of the Deer Park, says that thanks to a new assessed value of properties in the area, the language on the rerun levy will say $2.46 per $1,000 instead of $259.

This time, she's confident the community, posed with devastating budget cuts, will pass it.

"We’d passed levies for so many years, I’m not sure all of our voters got their levies in the mail this time," Cooke says. "I don’t think people realized it would be that close."

A waiter who was serving beer to German Chancellor Angela Merkel at an Ash Wednesday event last week instead dumped five cold ones down her back. USA Today reports that the 21-year-old cursed loudly as the beers tipped inexorably toward Germany's most powerful public figure.

To make matters worse, the whole thing was caught on video:

Another stabbing. Why is everyone getting stabbed? (KREM)

Acid in the oceans. Like a stabbing for fish? (Seattle Times) 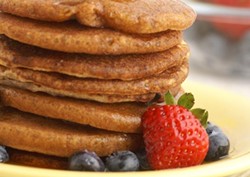 Organizers hope to raise $2.7 million for the charities.

Get in on thegoodness from 7 am-10 pm at all locations.

The Spokane City Council is set to vote down the proposed settlement that would reinstate a cop who drove drunk, hit another vehicle and left the scene of an accident, according to Council President Ben Stuckart.

"I don't think it sends the right message and I think we want to be heard loud and clear," Stuckart told The Inlander this afternoon.

Stuckart says he expects the council to be unified in voting to reject the settlement.

Mayor David Condon last week asked the council to delay the vote after the state Human Rights Commission decided to reconsider its recommendation that former Officer Brad Thoma be reinstated to the force. But Bob Dunn, Thoma's attorney, said earlier today that if the city didn't settle by Wednesday he would be filing a civil suit of at least $4 million.

That sum represents all the pay Thoma could possibly make through retirement, Dunn says.

When asked why he set the deadline for Wednesday, Dunn replied: "Why not? Because time has run out."