CAT FRIDAY: The cats of election 2012

Everyone's favorite day of the week is here at last!

With the final 11 days of the 2012 election season winding down, we figured what better way is there to celebrate the end of those annoying (and usually false) political attack ads on TV and the political flyers filling up your mailbox on the daily than doing something a little fun and cat-ty?

Thanks to the awesomeness of a free iPhone app we've stumbled upon -- called Cat Effects, you should download it right meow -- we were able to spice up the photos of a few of the most recognizable (and controversial) 2012 election candidates for your entertainment. 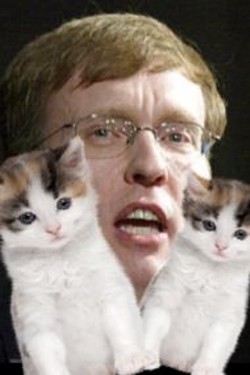 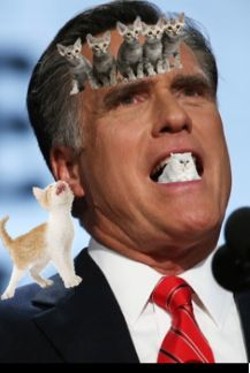 And here's Mitt, with a cat in his mouth, because well -- why the hell not.

President Obama always listens carefully to the advice of his feline advisors. While it may be a little known fact, in most cases cats really do know best how to handle sensitive foreign policy issues.

Or that her opponent, the very controversial Republican incumbent Matt Shea, actually brought his mutant pet cat, Charlton Heston, when he went canvasing at Biviano's house? We tried to contact Mr. Heston for comment on his owner's campaign, but he did not return repeated phone calls.