2012 was an exceptionally great year for cats. The masses were introduced to many great felines that cat-apulted their way to fame and recognition by millions, while others that have already been in the spotlight managed to keep reining in more adoring fans, or minions, as Colonel Meow would consider them.

To celebrate such a great year for cats, this installment of Cat Friday rounds up what we feel are the top cats and cat stories of the year. The cats are listed alphabetically because we honestly think they’re all equally special in their own ways.

We were pretty honored when aspiring world leader — and fellow Washington state resident — Colonel Meow agreed to answer our questions as part of an interview for Cat Friday back in October. As he was featured in the blog, his fan base — excuse us, we mean Minion Army — was exponentially increasing by the minute. To date, the fierce-looking Colonel has garnered an online following of more than 125,000. You can read Cat Friday’s interview with the Col. over here.

The story of this little cat, who’s been fighting an uphill battle since being rescued after she became trapped inside her family’s burning home in September, has captured the hearts of many. Dutchess' story of recovery and strength is inspiring, especially for an animal that can’t comprehend the meaning of life and the ways of the world. During the months she’s been in the care of the staff at the University of Illinois College of Veterinary Medicine, the improvements in Dutchess’ condition have been phenomenal. It’s hoped that soon she’ll be able to return home to her family.

Another kitty that overcame great odds for survival in 2012 is Dot. Dot was taken in by a New Jersey cat rescue and shelter, Tabby’s Place, in January after being found as a young kitten without the use of her hind legs. Dot was born with spina bifida, a birth defect that results in the vertebral arch not correctly fusing and thus leaving her hind legs useless. Dot spent the first year of her life having all sorts of fun adventures at Tabby’s, including getting her own mobility cart and a new best friend, D’Art, a little grey cat with a similar physical disability; his back legs are paralyzed and non-functioning, too.

The grandma and her cat who are BFF’s

A collection of beautiful photos rose to the surface of the Internet’s abyss this year, depicting the incredible bond and interspecies friendship between an 88-year-old Japanese woman, Misa, and her odd-eyed white kitty, Fukumaru. Photographer Miyoko Ihara captured the stunning images of her grandmother and the cat over a period of 13 years, and documented the pair’s unbreakable bond in a photo book. 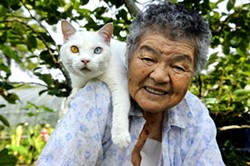 Not many cats can lay their claim to fame on the fact they placed third in a U.S. Senate seat race as a third party candidate. But Hank, a Maine Coon mix from Virginia, did just that when he ran against two human opponents during the 2012 election, on a platform of animal welfare and disgust for the U.S.’s political process. Hank also raised more than $60,000 for animal rescue organizations during his campaign.

2012 certainly saw its fair share of viral cat videos. One of the most viral cat video series of the year profiles an existentialist and pessimistic tuxedo cat, Henri, le Chat Noir. Henri stars in several black-and-white videos during which he ponders the meaning of life and the absurdness of the imbeciles he’s surrounded by. Henri’s musings didn’t go unnoticed, however, as he was one of the four finalists in the AmazeCats’ Whisker Wars competition, which sought to determine the public’s favorite Internet cat ever. Henri also took home the viral cat video version of an Oscar, when his series won the People’s Choice Award at the first ever Internet Cat Film Festival in Minneapolis.

Like her friend Grumpy Cat, LIL BUB is often confused for being male, and has her own set of physical differences that make her one of the most adorable and amazing creatures on the planet — the last phrase are BUB’s own words, folks. BUB, who always spells her name in all caps and considers herself clairvoyant, has racked up an impressive Facebook following of almost 86,000. BUB isn’t just about being cute and adorable, though — she’s using her status as a famous cat to help other animals in need, by promoting adoption and donating a portion of the proceeds from her merch sales to benefit animal rescue groups around her hometown of Bloomington, Indiana.

There’s no doubt that one of the most viral cats of 2012 is Grumpy Cat, the little frown-y faced kitty that’s charmed all of us with her perpetual disapproving expression. According to our records, Tard’s photo first popped up on Reddit back in September… and from then on, it seems the entire world has welcomed this little odd kitty with open arms. Though there may be more than a few fake Facebook pages for little Grumpy, her official page has a count of more than 286,000 likes. For the record, we also think her half-brother, Pokey, is pretty darn cute too. Check out Grumpy’s website for “The Daily Grump” photos which often feature her with Pokey.

In another part of Washington state, a cat who made headlines late this year is doing his duty to make sure students at Enterprise Middle School, in Richland, Wash., get across the street safely. Earlier this month the story broke about Sable, a 15-year-old black cat, who’s been coming outside of his home across the street from the school to greet kids going to and coming from school at the nearby crosswalk. His owner, Tamara Morrison, says the male cat has been faithful to this routine for about a year now and knows to stay out of the street, instead Sable prefers to take advantage of the passing children who stop to give him a scratch as they wait to cross.

Not long before Grumpy Cat and her mad face took the Internet by storm, another odd-faced feline was making headlines of her own. Venus the cat is rumored to possibly be a chimera, which could mean that she has the genetic material from two embryos that fused together while in the womb. It hasn’t been definitively proved through genetic testing, but this kitty’s half-orange and half-black face is stunning regardless of her genetic quirks.

The Comedy: Tim Heidecker is somehow both annoying and brilliant