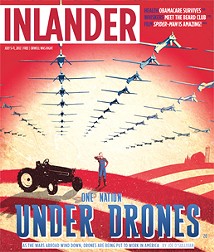 We wrote last July about the possibility of local law enforcement using unmanned aerial vehicles, or drones, for serve as eyes in the sky during standoff situations.

As drones have become a staple of U.S. war strategy, arms companies have begun looking to law enforcement as a local market.

But, some bad news on that front.  The city of Seattle today decided to shut down their police department's done program before it, er, got off the ground. Seattle had bought a pair of Draganflyer X6 vehicles through federal Homeland Security grants. But privacy concerns by the American Civil Liberties Union and others shut it down.

So, if Spokane gets some drones, we'll have something Seattle doesn't. And drones had some good news this week, too: the American public loves the idea of them.

Buzz on over to more City Hall Eyeball.

How local is local? And other questions about Best Of voting