While we're obviously proud to consider ourselves crazy cat people at Cat Friday/Inlander HQ, every once and a while a non-cat-related thing steals our attention and our hearts.

Sometimes this "not-a-cat-thing" is so unbearably cute that it rivals our feelings about cats, (in all seriousness though, even as staunch cat people, we love all animals) which is exactly what Lentil the French bulldog did when he burst onto the scene of viral Internet cuteness earlier this year. 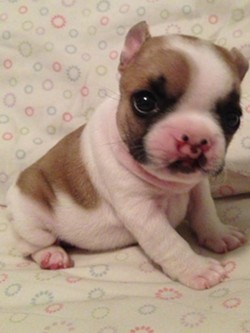 Lentil at five weeks old, photo taken in March. Can you handle how cute he is?!

Little Lentil Bean was born on February 2, 2013, and he was different from the start. The tiny pup and his litter mates were all born with hard and soft cleft palates and cleft lips so severe that Lentil was the only one of the puppies who survived past a few days of birth. The tiny "Bean" had to be tube-fed every three hours by his foster mom, who today is Lentil's permanent mom. Every day under her care, the teeny pup grew stronger and his fighting personality and will to live shone through.

From the start, Lentil captured the hearts of thousands with regular updates and photos posted to his Facebook page, where his adoptive mom continues to document his daily activities and progress through photos, videos and status updates.

Finally, at nearly four months old, Lentil was healthy and strong enough to undergo surgery to correct his cleft palate. It was a success. Since then, Lentil has taken on the important role of "ambassadog" and visits children with facial deformities at the Children's Hospital of Philadelphia as an official therapy dog. Lentil helps these children understand that it's okay to be different, and that being different makes them special.

Who would have guessed that such a tiny little "bean" would impact so many? Lentil has more than 108,000 followers on his Facebook page to date.

It wouldn't be quite fair if we ended this special dog-takeover of Cat Friday without pointing out that Lentil occasionally hangs out with a special feline friend, named Lavern.