It’s been known for a while that the commercial area of Kendall Yards — already home to the Inlander, Spa Paradiso and Central Food — will be getting some additional dining establishments in the near future.

Construction crews have been moving dirt around for a while and laying some groundwork, but today signs were posted with a much clearer idea of what’s coming soon:

The itinerant wood-fire pizza outfit, a favorite at the local farmers markets for the past few years, appears to be planning on a permanent home next door to Central Food.

For the past few years, chef Adam Hegsted of the Couer d’Alene Casino has been traveling around with a roving Northwest-focused dinner club concept called The Wandering Table. Now, on Facebook, the restaurant is listed with an address on Summit Parkway here in Kendall Yards.

Also apparently a Hegsted project, this one is described as a “contemporary style diner.” It will serve brunch seven days a week. 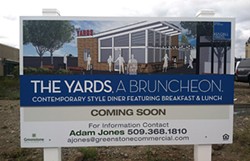 Finally, there is also this sign for an upcoming mixed-use, expected to have both housing and retail:

Come see the signs yourself this Friday, when Kendall Yards celebrates the official opening of the new portion of the Centennial Trail with a ribbon cutting and community open house. (Yes, we’ll be around, too.)