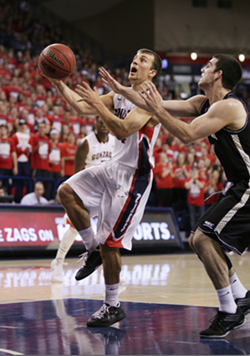 College basketball season is upon us, as you may have noticed on Saturday when the Zags met, and then promptly dispatched Bryant University.

Tonight, the Zags take on Colorado State here in Spokane at 6 pm. CSU made waves last season, earning their first national ranking in decades while advancing to the second round of the NCAA tournament.

It's going to be a nice first challenge for a Zags squad that looked solid on Saturday night, especially considering the amount of talent that went to the NBA (and wherever Mike Hart went) in the off season.

Tonight's game is part of an outrageous made-for-TV tradition over at ESPN that features more than 24 hours of nonstop basketball on the company's family of stations. Want to get a look at the Zags WCC rival BYU? Tune in at 8 pm to ESPN2 to see them take on Stanford. Or maybe you want to size up this year's St. Mary's squad? They're playing Akron at midnight, also on ESPN2.

And that pesky Wichita St. club that ruined GU's season last March? They play Western Kentucky at 10 pm. If you can't sleep, I recommend sitting in front of ESPN2 at 4 am to see Florida Gulf Coast in all of their dunking glory against Hartford. That game is being played live on the East Coast at 7 in the morning local time. They might as well play in their pajamas.

Brew the coffee. It's time for an all-nighter.

Support RiverLit to support Spokane’s artists (and get fun things)