There are only two more weeks of the South Perry winter market, including the one happening right now from 3 to 6 pm. And even if the produce isn’t as abundant in winter, that just means you don’t have to feel so bad about buying cupcakes instead of kale. 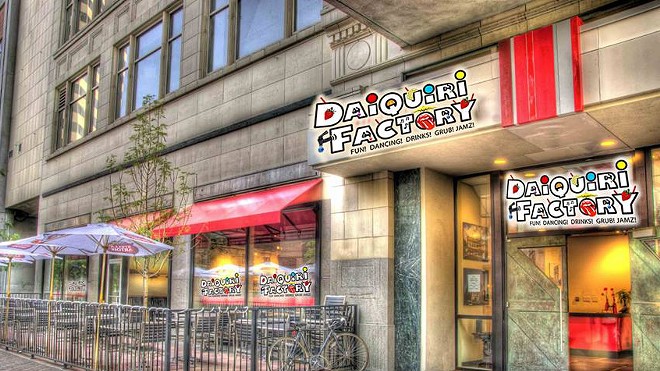 Daiquiri Factory Facebook
This, or something like this, is what's coming to the downtown space that was previously Beignets.

Spokane Cheesecakes will be opening their doors this Saturday, at 1420 E. Sprague.

Also on Saturday, Kendall Yards is hosting a holiday bazaar with local vendors including Brain Freeze Creamery. Then, on Dec. 21, Kendall Yards has a caroling and marshmallow roast event that features Veraci Pizza.

On Sunday it’s the annual Gingerbread Build-Off at the Davenport.

Coeur d’Alene has a new restaurant, Asian Twist, from the owner of Fu-Ki Japanese Steak House in Post Falls.

12 String Brewing Co. is having a 2nd Anniversary party this Sunday with the release of their Volume 2 Anniversary Ale.

With less than 12 hours to spare, Batch Bakeshop met its Kickstarter campaign goal this morning. There are still a few hours left if you want to get in on the rewards.

One Tree Hard Cider found a location in Spokane Valley.

The Pour Fool, an authority on Northwest beer, named Selkirk Abbey the best brewery in Idaho for 2013: “Selkirk isn’t a household name yet. It’s quite possible this is the first you’re heard of them. But with the sheer flavor and quality of what they’re pouring every day, obscurity has the life expectancy of a fruit fly, there in Post Falls.” Selkirk Abbey also announced they’re getting close to distributing in Montana.

The annual holiday gift guide came out this week, and the various categories include a whole bunch of local food-related ideas. Speaking of Selkirk Abbey, a quick gift guide addendum: If you’ve got a family member who drank an IPA one time and got scared off craft beer, bring a bottle of the Deacon Pale Ale to holiday festivities.