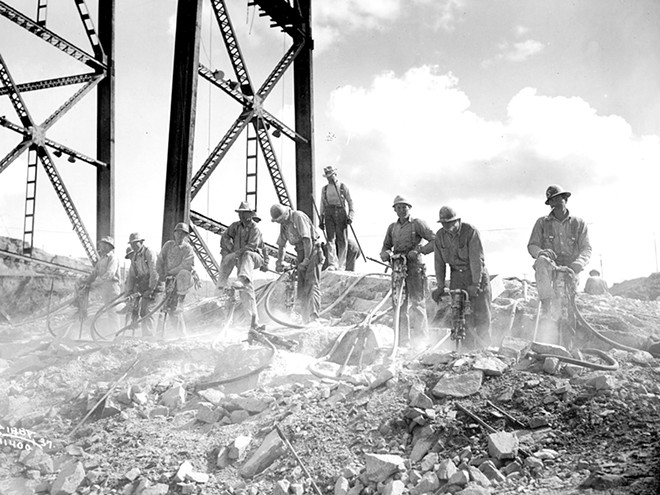 Now that we’ve had the fireworks and champagne toasts to welcome 2014, everything we wrote in 2013 is technically history. But a number of our stories printed last year looked back further to previous decades — even centuries — to tell stories of the region that might otherwise fall out of memory or remain hidden.

Here are 10 that illuminated parts of our region’s history that I didn’t previously know, listed generally from long-ago happenings to the more recent past:

1. Soaring Again
The last documented condor sighting in Washington was in 1899. They were described by naturalist David Douglas, featured in an exhibit at the Northwest Museum of Arts and Culture this year, and the MAC decided to include a condor presence in the show. Longtime historian Jack Nisbet tells the story of what it took to re-create the bird that once lived here.

2. Axe Murder
In 1906, 17-year-old Sidney Sloane killed his father in their Spokane home after an argument, and the following trial became a headline-grabbing sensation nationwide. When he was released from prison at age 40, he again made headlines in Spokane, but for a different reason. This is my favorite of Nathan Brand’s mini-documentaries from this year, but also see the history of the Park Inn and the first installment of “Unsolved Secrets of Lost Spokane.”

3. Through His Eyes
We know what Spokane looked like in the past thanks to Charles Libby, a tireless commercial photographer who worked in the city for the entire first half of the 20th century. We know very little about him, though.

4. Wonder of the World
Looking back on the massive undertaking of the Grand Coulee Dam, 80 years after ground was broken.

6. Fade to Black
The heyday of the drive-in movie theater ended long ago, before the arrival of strip malls and big-box stores. And now the drive-in may be gone forever. (After this story was published in the summer, we did have an update with hope for a drive-in revival.)

7. The Ice Age
The Spokane Comets only existed for five years, but sports writer Howie Stalwick remembers them as the best Inland Northwest hockey team of all time, and an inspiration.

8. Haunting a Ghost Town
The town of Elberton, 60 miles south of Spokane, was booming at the beginning of the 20th century, but its population dropped below 70 by 1966 at it disincorporated. Now its “mayor” keeps the ghost town’s memory alive.

10. So Where Did the Inlander Come From?
The Inlander celebrated its 20th anniversary this October, and publisher Ted McGregor reflected on how the paper came into existence. Don’t miss the vintage footage in this companion video produced by Nathan Brand.