CEO search: The WSU Foundation has begun searching for someone to fill the CEO position that's been left vacant for more than three and a half years. The search is a national one and the board hopes to fill the vacant position by July 2014. (Daily Evergreen)

Study abroad in South Korea: The faculty-led study abroad program will take place from June 23 to Aug. 8 during the second 2014 Summer Session and students will gain hands-on experience in international sports management. The country hosted the 1988 Summer Olympics, the 2002 World Cup and the 2011 World Championships in Athletics and has been selected as the location for the 2018 Winter Olympics. (Daily Evergreen)

Opus Prize selection: Gonzaga has been selected to host this year’s Opus Prize selection, in which the Opus Foundation distributes one $1 million award and two $100,000 awards to three “unsung heroes,” namely humanitarian leaders from around the world. Gonzaga plans to take this a step further by incorporating Opus Prize themes into the curriculum to inspire global awareness and dialogue between students and faculty. The prize selection will take place Oct. 14-16. (Gonzaga Bulletin)

Act Six Academy: Whitworth is introducing the Act Six Academy program, an intensive leadership-training course and scholarship for 20 incoming freshmen from the Spokane and Seattle/Tacoma areas. The program will be free to students. (Whitworth News) 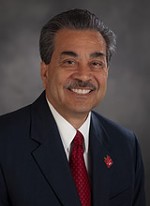 President to retire: EWU president Dr. Rodolfo Arevalo has announced his retirement effective July 15, 2014. He came to EWU in April 2006 from the University of Texas-Pan American and is the first Latino president at any public four-year college or university in the state. (KREM)

Get Lit! 2014: Spokane’s annual literary festival, sponsored by EWU, will be at various locations April 7-13. It will, as in past years, include workshops, readings and poetry slams. (S-R)

More space: The state House has voted to close Innovate Washington, a startup incubator based in Riverpoint, and turn over all its space, records and furniture to WSU. WSU already planned to move into the building and turn over some of that space to EWU.

No up-front costs: Students in Washington state could be among the first to go to college without having to worry about paying tuition up front. Instead, under a bill proposed in the state House, they would pay after leaving school in the form of a small, fixed percentage of their future income for up to 25 years. (KHQ)

With Everett winning the wing, Boeing battle comes to an end (for now)

The Pharmacist Will See You Now