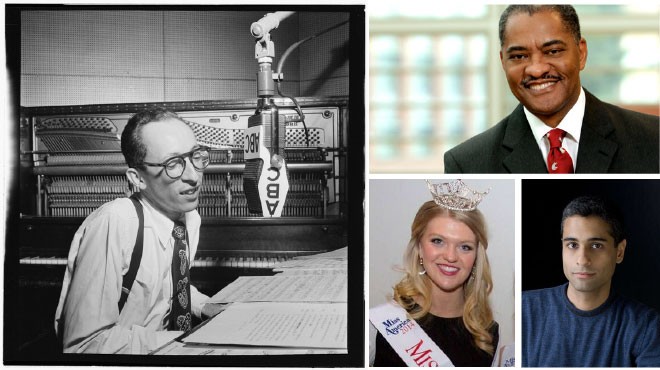 Library of Congress/WSU/Rocky Castenada Photography
Clockwise from left: Buddy Weed, one of the musicians featured in the Blindfold Tests Collection released by U of I; WSU President Elson S. Floyd; speaker Siddharth Kara, coming to GU; and Miss Spokane Kailee Dunn, a senior at EWU.

Annual fashion show need help: Co-directors are recruiting designers, artists and dancers to participate in this year’s Moscowrade Fashion Show to be held at on Sat, April 5 at 7 pm at Ambassador Auto Service Inc. There is no limit on the number of designers chosen and applicants don't need extensive qualification. Anyone is welcome to apply as long as he or she is at least 18 and a member of the community. (The Argonaut)

Paid internships: Idaho's Experimental Program to Stimulate Competitive Research has instituted the MILES Undergraduate Research and Internships Program (MURI). MILES (Management of Idaho’s Landscapes for Ecosystem Services) intends to help students without real world experience in their chosen fields. As of now, up to 60 students from universities in Idaho will receive MURI internships every semester and during the summer. (The Argonaut)

Jazz collection: As part of this year’s Lionel Hampton Jazz Festival, U of I has released the Leonard Feather Blindfold Tests Collection, a new collection of recorded interviews with jazz greats such as Duke Ellington and Dizzy Gillespie conducted by jazz journalist Leonard Feather. (U of I News)

President to stay: The WSU Board of Regents voted to extend the contract of University President Elson S. Floyd until June 30, 2021. (WSU News)

Gay-friendly campus: WSU is found on a newly compiled list of America’s 25 most gay-and-lesbian friendly college campuses. It was compiled by the Campus Pride Index and based on a 50-question and eight factors of inclusion. WSU students were praised not only for support but outreach. (Seattle Times)

Memorial planned: A memorial is being planned at EWU for two students who were killed in a car accident last week. (Yakima Herald)

Modern slavery research: Tickets go on sale tomorrow for GU's Presidential Speaker Series Lecture with Siddharth Kara on April 1. Kara is an advisor to the United Nations, the U.S. and governments all over the world on anti-trafficking policy and law. He will share his research on sex trafficking and modern slavery. (Gonzaga News)

Real Hope Act: The House has approved a bill on offering financial aid to students brought to the U.S. illegally. The bill has been sent to the governor, who has said he supports it. Under the legislation, students can receive financial aid if they've been granted Deferred Action for Childhood Arrival (DACA) status and meet other conditions like getting a high-school diploma in WA and living in the state for at least three years before getting a diploma or its equivalent. (Seattle Times)

Budget changes: A Washington Senate budget change would add money for schools - allowing state colleges to keep tuition from rising. The budget proposal also has an extra $25 million for scholarships that go to college students in computer and engineering related fields, and $5 million for State Need Grants. EWU would get $1 million to expand enrollment in engineering programs. (S-R)

Credits for military training: All public colleges and universities in WA would be required to award academic credit for military training under a bill pending in the Legislature. The Senate passed the bill unanimously and is scheduled for a vote in the House Committee on Higher Education today. (The Oregonian)

Graduate Program Fair: Graduating seniors in North Idaho interested in grad school options in the area can learn about them at a Graduate Program Fair that will be held March 5 in Coeur d'Alene. Students can learn more about the programs offered at Boise State, EWU, Gonzaga, Idaho State, U of I, WSU, Webster and Whitworth.

Removing the D: Former President George W. Bush is trying to remove the word "Disorder" from Post-Traumatic Stress Disorder. The George W. Bush Institute and Syracuse University are undertaking a study on issues affecting veterans who have served since Sept. 11, 2001.(ABC News)

Out for Inlander Restaurant Week: At Santé with Michael Baumgartner