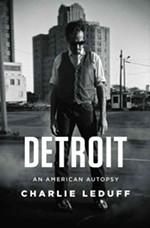 First things first. If you don’t know the name Charlie LeDuff, watch this. Now this. OK. That guy is a Pulitzer Prize-winning former New York Times reporter and he’s got a mix of serious chops and flair you won’t find anywhere else. LeDuff’s Work and Other Sins, which I recently finished, is a collection of New York City vignettes, stories of bar patrons and factory workers and 9/11 firefighters. The stories are dense with sensory detail, pulling you into the city and the lives of its characters. Now I’m on to Detroit: An American Autopsy, in which LeDuff returns to his broke and broken hometown. With writing that can at times, like LeDuff’s on-screen presence, feel too sensational, the book explores the big news behind the city’s fall: the politics, the corruption, the pension plans. But it also paints a vivid portrait of the city, its people and the lessons Detroit’s story holds for the rest of us. As LeDuff puts it, “You better look at Detroit because that’s what happens when you run out of money.” 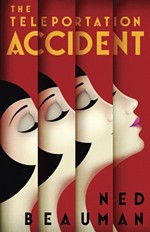 One of my favorite blogs these days is Go Book Yourself because it’s a human curated feed of books to read based on ones I’ve already read and love. It’s not like those generic Amazon recommendations that sometimes totally miss the mark. I’ve gone back to Go Book Yourself time and time again, and I’ve not once been disappointed. Right now, I’m working on Ned Beauman’s The Teleportation Accident, recommended because of my love for The Da Vinci Code and anything Jorge Luis Borges ever wrote. Being myself a little obsessed with the idea of teleportation (if I had a superpower, that would definitely be it), the title jumped out at me and I have not at all been disappointed. I’d never read any of Beauman’s work before, but his writing is sharp and funny and he gives us the beginnings Nazi Germany but from the perspective of a totally clueless, apolitical, unlucky-in-love theater set designer determined to solve a few mysteries of his own. There’s history, there’s romance, there’s noir and it all works together beautifully, the end result being this amazing page-turner that keeps me up at night.

First, a confession. I used to be an avid reader, devouring books by the week. But lately whenever I sit down to read in the evenings or before bed, all I do is fall asleep within mere minutes. That said, it takes me ages to get through a novel, so instead I’ve been bookmarking and saving tons of long form pieces to my Instapaper account. The most interesting piece I’ve finished recently is Buzzfeed’s longform piece on the Russian political activist band Pussy Riot. “What Does Pussy Riot Mean Now” gives both a history of how the all-female group’s members came together, and how two of those women ended up being imprisoned by Vladimir Putin for two years after the group’s famous protest performance inside Moscow’s main cathedral. The piece also examines the feelings of Pussy Riot’s members who weren’t jailed, and their fear the group’s overall message has been lost now that two of their bandmates are internationally famous.

The military-civilian divide is a topic that interests me enough I’ll click just about every link I see about it — so I know when I encounter a particularly good story or essay, and I recently read an exemplary one: “After War, a Failure of Imagination,” an essay in the New York Times by Iraq veteran and author Phil Klay. In it, he challenges the notion that war is a uniquely terrible experience understandable only to those who were there.

It’s a difficult spot to be in, for both. The civilian wants to respect what the veteran has gone through. The veteran wants to protect memories that are painful and sacred to him from outside judgment. But the result is the same: the veteran in a corner by himself, able to proclaim about war but not discuss it, and the civilian shut out from a conversation about one of the most morally fraught activities our nation engages in — war.

Another of my topics: Women’s participation on the Internet, of which there have also been some great pieces recently. Start with this long piece by Amanda Hess about attempting to document anonymous threats; then this shorter, detailed piece by Amy Wallace about the personal attacks on women who write about controversial topics; then this personal story by Laurie Penny about why short hair brings out the Internet hate.