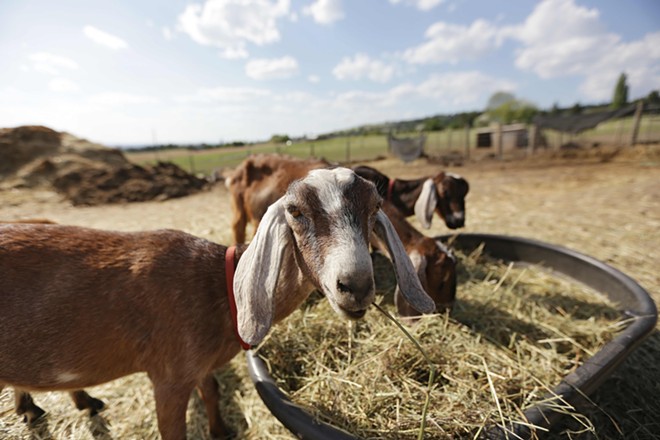 After months of talking with people interested in backyard farming, Spokane City Council President Ben Stuckart has introduced a set of proposed changes to city rules that could make it easier to keep animals and sell produce grown in your backyard.

The changes, on which the council will vote March 24*, redefine which animals are allowed inside the city and who can sell produce grown in their garden. Here are the basics (find the full ordinances and a Q&A from Stuckart at the bottom of this post):

For every 1,000 feet of space on a lot, residents can keep one small animal, like a chicken (no roosters). Every 2,500 square feet allows for one small livestock, like a small breed of goat or pig. To qualify as small livestock, these animals have to be non-meat-producing breeds.

In an attempt to be sure people keeping animals are treating them well and are educated about how to control smell and noise, residents will be required to take a class at Washington State University's Spokane County Extension to get "animal keeping certification." It's worth noting there will be no grandfathering-in of people who already have, for example, chickens at home. Anyone owning chickens or small livestock in the city will be required to take the class. The course will cost $40 per person, meaning it will come at no cost to the city, Stuckart says.

They would be required to get a city business license to do so. UPDATE 3/19: The program will no longer require business licenses to sell produce. Find the newest version of the ordinance at the bottom of this post.

The colored areas of the map below show which neighbhorhoods qualify. To zoom in, click here and then on the plus sign next to "boundaries" to see a drop down menu. Click "boundaries" and "community development neighborhood" to see the map.

UPDATE 3/10: The city council voted unanimously at its March 10 briefing to amend Stuckart's ordinance to allow market gardens city-wide. The council also voted to increase the size allowance for the gardens from 4,000 to 6,000 square feet of garden per 21,780 square feet of lot.

If you have feedback about the plans, you can contact council members in advance or testify ahead of the vote on March 24* at 6 pm in council chambers at City Hall.

*An earlier version of this story reported the vote was March 31, but it has now been rescheduled for March 24.

For now, though, let's cut to the chase: With the right amount of land and a course from WSU, you could have a tiny pig in your backyard. So, get educated and then take a look at your future.

Urban Agriculture FAQ (as of 3/6; see ordinance changes above)

Tool kicked it off in Spokane