“The Talk” on growing up black in the Inland Northwest 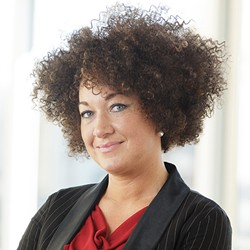 About the same time most parents get around to telling their kids about the birds and the bees, parents of black children in America sit their kids down for “The Talk.” This talk almost always includes the standard DWB and SWB (Driving While Black and Shopping While Black) components, but as a mother raising two black sons in North Idaho and Spokane, I had to draft a prologue, several chapters, a glossary and footnotes to the standard monologue. And while “The Talk” is traditionally an annual event or coming-of-age moment for many families, it is not a special occasion in our household, but rather a daily corrective for living in the Whitopia of America.

It was after they had already encountered biased incidents at ages 4 and 5 that I began an at-home remedial curriculum for surviving life as a black boy in a white community. I tried to prepare them for a wide array of styles and methods of institutionalized and individual racism, but I failed to anticipate some of the extremities our family would face.

One Saturday morning, my kids burst into my bedroom. “Mom, there's a rope hanging in the backyard; it looks like a noose!” I raced outside as my mind instantly tracked back to the parting words of a colleague at Howard University when we left Washington, D.C., en route to Idaho. “Don’t go there; you’ll get lynched!” I remember brushing off her comment with some theoretical statement about not living in a culture of fear. But that day my sons found the noose really broke my heart in a certain kind of way. I hadn’t told them about all the other incidents of harassment toward us before that day; I wanted to be their shield against the wave of terror that kept me awake at night. And now they were faced with a symbol of death when picking garden strawberries for breakfast. The police came. They interviewed all three of us, mumbled something about us getting security cameras and logged the incident as a hate crime. Our house was burglarized not once, but several times. There were nooses, swastikas and death threats.

Over dinner one day, my son asked, “Do those people who harass us have kids? Because I think I met one of them at school today.” He had been taunted at recess, being called names like “monkey” and other racial slurs. When reporting the incident, he had to educate the supervising staff about why “monkey” was offensive to black people. Thankfully, we had already been having “The Talk” for four years by then, so he knew how to back up his statements with historical references. He was asked to give the school’s only Black History Month presentation the next year. Educating educators and doing the job of professionals at 9 years old; gosh, they grow up fast these days.

On the first day in second grade, my son came home with a despondent face. Never mind the fact that he was stung by a bee inside his ear that day; what was really on his mind was that he was the only black kid in his class again. Perplexed, I said that two of the other kids in his class looked black. “They don’t know they’re black,” he said matter-of-factly. At 12, he still distinguishes himself as the only black kid at his school actually being raised by a black parent.

Living in this area, “The Talk” is much more than a primer on what to do when you get pulled over by a cop, or how to steer clear of the school-to-prison pipeline. It’s about making a midnight run to buy a set of headphones for your son to wear in between his classes so he doesn’t have to hear the “N” word as he walks down the high school hallway every day. It’s about protecting your kids from the psychological disorders which can result from growing up labeled as the “other” in their classroom and being presumed guilty until proven innocent.

We must tell them that, amid all the constant reminders of what the supra-dominant culture sees as normal, acceptable and healthy, they have a rich legacy, a hidden history that begins with the origins of humankind and civilization itself. And when they are mocked, demeaned, and even injured, to hold onto the belief in their own worthiness.

After opening a dialogue, maybe some of their questions will be hard to answer — like why our state and their elementary school is named after former slave owners, or why they will never see their best friend again because his parents pulled him out of public school once they found out about their interracial friendship — but we have to begin somewhere. Developing a responsive and open dialogue is a great place to start. ♦

Rachel Dolezal, formerly of the Human Rights Education Institute in Coeur d'Alene, is an award-winning artist and activist who teaches courses in art, Africana history and culture at area universities.