Steve Salvatori to resign in July 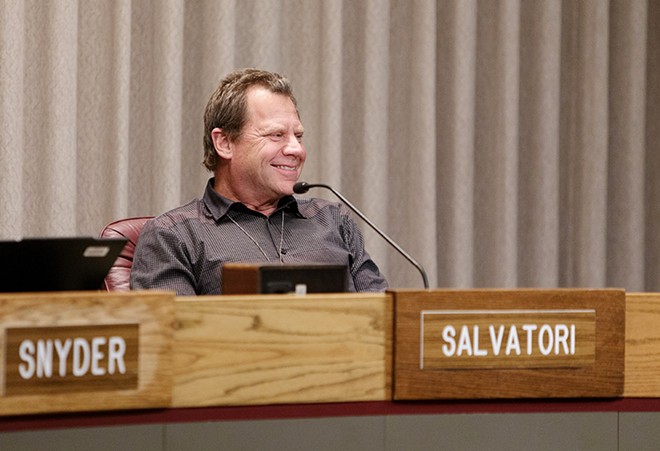 In less than two months, Salvatori will have emptied his City Hall cubicle and packed his bags for Dallas. He says he’s moving there with hopes of righting the course of the company he founded nearly 30 years ago. The company, which connects over-the-counter medication providers with drug stores they sell to, recently moved its headquarters to Texas, but its president has delayed his own move to the new headquarters. Now, Salvatori says, that delay is starting to affect business and, as its CEO, he needs to be there in person to help.

“When you’re the founder and CEO, ultimately you can’t ask people to do stuff you wouldn’t do yourself,” he says.

To appoint Salvatori's replacement, the remaining six members of the city council will announce the vacancy within a week of his last day and determine how long the window will be open for people to apply for the job. The council will then interview the candidates and vote for a replacement. The interviews and vote will be open public meetings, but the council is allowed to enter closed-door executive session to “evaluate the qualifications of each candidate,” according to the council’s rules of procedure.

Salvatori, who moved to Spokane with his wife after shifting to half-time at his company in 2007, also founded the Spokane Entrepreneurial Center, a startup incubator housed in historic downtown buildings. For now, a business partner will take over managing the buildings, though Salvatori says he plans to eventually sell them.

Looking back on his two and a half years on council, Salvatori says he’s proud of his work on animal control, the city’s waste-to-energy plant and reforms to the Office of Police Ombudsman as well as his leadership of the Fire Task Team, which made recommendations for improving city fire service, including testing one-person Alternative Response Units to respond to non-life-threatening medical calls.

Despite their disagreement on many issues, Council President Ben Stuckart says he and Salvatori have become close friends.

“Having him leave town sucks,” Stuckart says. “It makes me sad.”

And even with the recent tussle between the two over whether the council should be considered a full-time or part-time job, Stuckart says he respects Salvatori’s commitment to his other job.

“Everyone has different priorities at different times in their lives,” Stuckart says. “I’m always OK with people making decisions based on their priorities.”

In a statement about the resignation, Mayor David Condon called Salvatori “a big part of making needed change in Spokane.”

“The people of Spokane are losing a great advocate,” the statement continued, “but I fully support Councilmember Salvatori’s decision, and wish him and his family continued success.

Salvatori says growth at the company he founded — Salvatori-Scott, which represents product manufacturing companies and stores they sell to, like Walgreens — demands he move to Dallas.

Salvatori was elected in 2011 and sworn in in 2012 for a four-year term, meaning the resignation will cut his term a year and a half short. During his time on council, he has advocated for business interests and helped lead the latest push for increased independence for the city's Office of Police Ombudsman.

Here's the announcement he sent the rest of the council. Look for more details here later today.

It is with deep regret that I inform you of my intention to resign from Spokane City Council effective July 8, 2014. It has been a privilege and a pleasure to serve the citizens of Spokane for the past two and a half years. It has been a wonderful experience to have shared the chamber with all of you.

As I look back at my time on council, I think one of the things I am most proud of is the way our entire council has conducted itself, even when we find ourselves in disagreement. It only makes sense that if our body is supposed to represent the 210,000 citizens of Spokane, we will occasionally have different points of view which I believe we have all handled respectfully and gracefully.

I know many folks will want to know why I would leave a position I worked so hard to attain, and have enjoyed so much, and I will tell you this was not an easy decision for my wife and I. But the company I started 28 years ago, and which I still serve as CEO, is undergoing significant growth, challenges and opportunities. It has resulted in the relocation of our corporate headquarters from San Francisco to Dallas, and has caused a cascade of personnel impacts and strategic decisions. Quite simply, our SSI boat is rocking, and I need to move to Dallas.

There are so many exciting things happening in Spokane, and I am saddened I will not be on council as the Convention Center Expansion Project is completed, the new Walt Worthy Hotel opens, the Riverfront Park Master Plan implemented, and we see the continued rejuvenation of our core downtown and our wonderful neighborhoods.

Thanks for exuberantly joining me in the Old 621 ceremonies, and I will say again that it has been a privilege and a pleasure to serve, because it truly has.

What happened at Sasquatch! 2014 … is shared here

How race plays a role in white-on-white crime