This weekend, a Spokane dodgeball team comprised of seven seniors from Gonzaga University is showing off its skills at a competition reminiscent of Ben Stiller’s air time on Channel 8: The Ocho. Yes, there is an actual Dodgeball World Championship. And this team already knows what it feels like.

They're returning to the tournament, hosted in downtown Las Vegas, after an early departure from last year’s competition. In their second year, team member Sean Brennan says they hope to come home with a medal.

Have they been hurling wrenches at each other? Not quite. But the preparation for this competition stems back several years.

Early in 2012, Brennan stumbled upon a flier for the regional tournament hosted in Spokane. Fresh off a win in Gonzaga's intramural dodge ball league, Brennan and his teammates decided to enroll. That Oz Fitness dodge ball tournament offered up a grand prize of $1,000 cash, or round-trip airfare for seven players to the Dodgeball World Championship.

A lighthearted activity becomes much more serious when you dangle an all-expenses-paid trip to Vegas in front of a group of college students.

After earning fifth place that first year, the team returned with determination in 2013 and swept the courts, finishing undefeated and earning the prize that took them to Vegas last August.

This year, they've stepped it up even further by forming an official Dodgeball Club at Gonzaga, and selected players for a tournament team that won the Oz Fitness tournament once again. 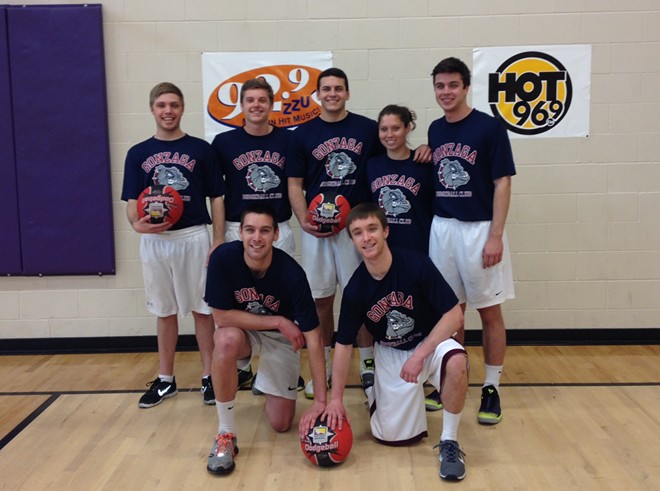 Rachel Hogan
The 2014 squad at the Oz Fitness Dodgeball Tournament in Spokane.

The World Championship allows open registration to any team from around the globe. The team will compete in multiple divisions, beginning with foam balls and advancing to the rubber ball league that Brennan refers to as 'the granddaddy' of the game. Gonzaga's co-ed team begins on Friday and plays through Saturday afternoon. They're set to encounter teams from Canada, Japan and Australia, in addition to squads from across the states.

"These teams are good, but hopefully we can do our best to compete," Brennan says.

These dodgers have packed their kneepads, prepped their game strategy and are ready to create a true underdog story of their own.

This is how brash bike thieves are in Spokane