Tom Vilsack, secretary of the U.S. Department of Agriculture, announced the Forest Service had seen staffing and costs for wildfire management more than double in the past 20 years, increasing from 5,700 employees in 1995 to about 12,000 employees this year. Wildfire has gone from 16 percent of the department's budget to 42 percent. 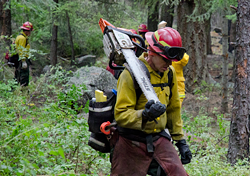 In that same time, staffing dedicated to land management and maintenance has dropped 35 percent, from 17,000 to 11,000. Much of the wildfire funding has been scavenged from other programs, causing budget shortages and lengthy deferrals on maintenance projects.

Record setting wildfires, such as the Carlton Complex in Central Washington, which destroyed more than 250,000 acres and hundreds of homes, have again stretched resources. Vilsack argues the federal government should fund such incidents from existing natural disaster relief funds instead of forcing the Forest Service to scramble its budget every fire season.

The new report cites a variety of reductions in maintenance and prevention programs including a 22 percent reduction in funding for vegetation and watershed management.

"The reductions have limited the agency's ability to prevent and limit the spread of invasive species; to decrease the backlog of deforestation and young stand management needs; and to lessen the severity and extent of insect, disease and fire prone forest stands," the report states.

Facilities funding has also decreased 67 percent, causing deferred maintenance to about 21,600 recreation sites and 23,100 research or administrative facilities, 41 percent of which were assessed as in "poor condition."

The Forest Service previously released a state-by-state list of deferred projects, including more than $290,000 in trail improvements in Washington state, deferred upkeep of facilities at Mt. St. Helens and repairs to research labs in Olympia.