Got Hops? Local breweries need them for fresh hop brews

There's a reason that September is one of my favorite months of the year. It's not the arrival of football, although that doesn't hurt, but rather the appearance of fresh-hop beers at local breweries.

For the uninitiated, fresh-hop beers are made from whole hop flowers that are freshly harvested and put into the brewing process. If the brewer gets to them within a couple days of being picked, the hops release an oil that gives the beer a stronger, richer hop flavor. The process also makes the beer smell like what I imagine God's beer smells like.

Tomorrow, Iron Goat Brewing is brewing up its Spo Hop beer for the second straight year and again is asking for the public's help. If you have hops growing in your yard, cut those vines and bring them to Iron Goat for the Spo Hop picking party between 11 am and 2 pm, at which point the hops will be dumped into the brew. If you help pick or bring in your own hops, you get $2 off pints of Spo Hop when it arrives. There will be music at 3 pm.

Laughing Dog Brewing up in Sandpoint is also making a fresh hop beer and has had volunteers picking hops the last couple of days. They've been giving those who pick hops a free beer for every half hour of work on the vines. They'll be brewing up their award-winning fresh-hop beer this weekend, and plan to have it on tap by the end of the month. 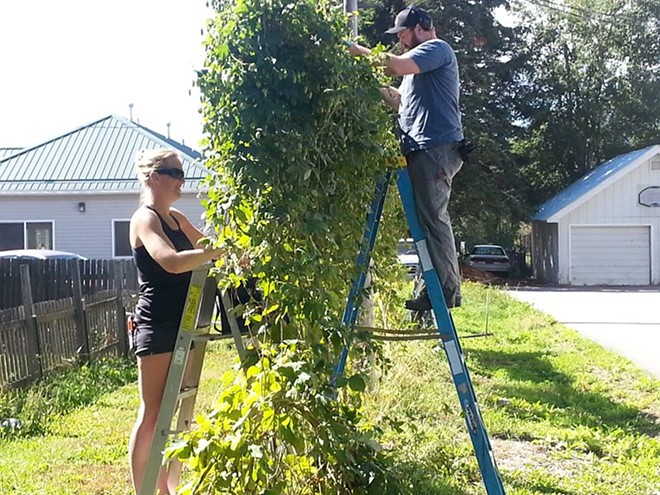 Volunteers have been helping pick hops the last couple days for Laughing Dog Brewing in Sandpoint.

The most revealing findings from the CdA dog shooting investigation docs