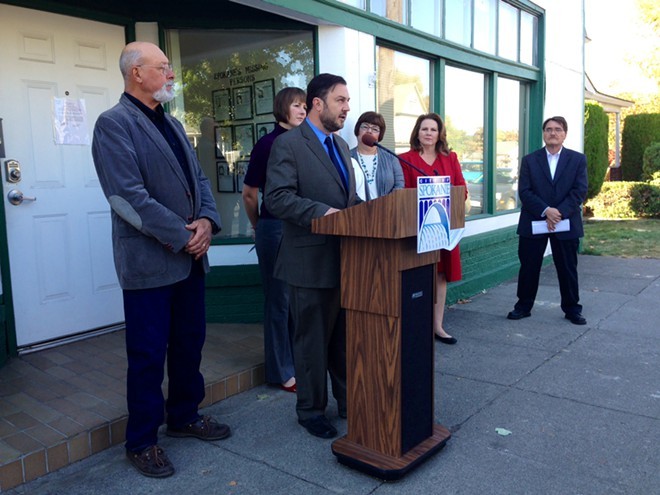 If you thought the holiday season might dampen the Spokane City Council's antipathy toward Mayor David Condon, think again.

The council passed a $600 million budget Monday night that has the potential to strip Condon's version of the budget of some of the raises for his cabinet and funds about $600,000 worth of programs and positions he'd skipped over.

The mayor drew ire earlier this year when he released his draft 2015 budget, which included raises averaging 2 percent for department heads within the city, including Police Chief Frank Straub, Fire Chief Bobby Williams and the mayor himself because the city charter says his salary should match the highest paid city employee (which, according to the new budget, would be Straub). A majority of the council took issue with the raises because other requests they'd made — including more funding for the Community Oriented Policing Services (COPS) program, a new planner and an attorney to work for the council instead of the administration's legal department — weren't included.

"I'm committed to changing the imbalance in this budget," Councilmember Amber Waldref said at a press conference criticizing the mayor's budget in early October.

Condon argued that the raises were required by certain contract agreements (for example, Straub's salary is tied to what lower-ranking officers are paid, which is determined by contract negotiations) and "step increases" (essentially guaranteed raises that high-ranking officials get after they've been at the city for certain lengths of time). On his own raise, he later relented and said he wouldn't take the $7,000 increase he'd originally budgeted for. He also says he doesn't take the pension he's eligible for in order to save the city money.

Even so, City Council President Ben Stuckart cited a piece of the city's administrative policy that says employees "must have received a performance evaluation" in order to get their step increases. In a letter dated October 20, Stuckart asked the city's Human Resources Director Heather Lowe for copies of the performance evaluations for all exempt employees who'd been "deemed eligible for a step increase."

Two weeks later, Lowe wrote Stuckart back pointing him toward the administration's performance measures, which gauge whole departments' success based on certain types of services they provide rather than evaluating individual employees. She called the performance review process "extremely outdated and ineffective." So, how many employees did receive performance reviews and will therefore keep their budgeted raises?

"I assume none because of their answer [to my request]," Stuckart says.

In response, the council's adopted 2015 budget removes any raises for exempt employees who are not given performance evaluations by the end of 2014.

In another coup, the council defunded a controversial position within the fire department, redirecting that $108,000 salary to the department's overtime fund. The Assistant Director of Integrated Medical Services position, held by Mike Lopez, was funded through a budget transfer that some, including local fire union president and Stuckart ally Don Waller, have argued violated city code. Some on the council have also taken issue with the fact that Lopez's position, which is exempt from civil service, was created shortly before a court decision reversed the fire department's expansion of exempt positions. Stuckart told the Inlander Monday that he wasn't sure if the fire department could continue paying Lopez from its overtime fund, or whether the move would mean Lopez would be fired.

"All I know is how to move the money around," Stuckart said.

In other changes to the budget, the council funded the following:

Stuckart says the money for those efforts came from a combination of excess revenue left over from last year's budget, money that had been directed toward reserves and savings on the implementation of the city's new emergency dispatch system. He says he didn't count on any of the potential savings from withholding the mayor's proposed raises since it remains unclear how much those savings could be. (Instead, those will go back into the corresponding departments.)

After a brisk discussion and some public testimony in favor of the COPS funding, Councilman Mike Fagan cast the lone no vote. He says he doesn't support a new council attorney, the apprenticeship enforcement officer or the new planner. And while it was clear from the start he was in a very lonely minority, he remains ever the idealist.

"You stand on principle," he said after the meeting. "You stand for what you believe."

Dialing up the past: The return of the Tiki Lodge