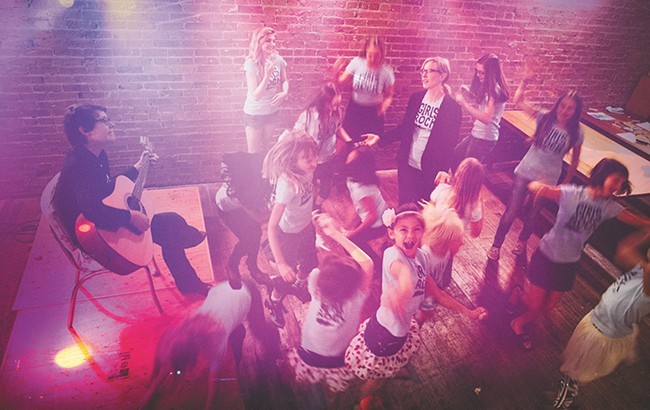 Kristen Black
A scene from the first Girls Rock Lab, at INK in August 2014.

At the turn of each new year, we jot down our resolutions. Some are sure to be those unaccomplished goals from the 2014 list, while other entries are more innovative and intended to challenge us to develop a new talent.

The fledgling arts education nonprofit INK Artspace is collaborating with the Spokane Public Library to offer a few early options for ambitious local kids to get started on their 2015 resolution lists.

These two workshops are directed toward ages 8-18: Girls Rock Lab, a series to expand musical and instrumental knowledge, and Pixel Playground, offering participants the chance to experiment with digital arts. Each program runs for two hours every Tuesday through the month of January, and welcomes students with or without experience. Both programs are free, and registration is required.

Girls Rock Lab, held at the Hillyard library branch, had wild success with its first appearance in August at INK's downtown space.

"The first time we did the lab it was super fun, so we wanted to go ahead and offer more," says Mischa Jakupcak, INK Artspace board president. She adds that girls will experiment with something new each week, from singing and songwriting to percussion and drumming.

"We want all the kids to walk away with something they personally created," Jakupcak says.

While the first Girls Rock Lab had a great turnout the first go-around, INK Artspace leaders sought to expand to local libraries in order to reach a different group of kids. In the heart of downtown, INK is located away from major residential neighborhoods.

"We were able to reach only a very select group of kids, so we figured this time we would like to reach out to the neighborhoods where the other kids are," Jakupcak says.

Spaces are filling up fast and only a few spots remain for both programs. Registration forms can be found online on INK's website.