Today the Spokesman-Review joined the growing number of newspapers to have published the controversial cover of French satirical newspaper Charlie Hebdo. Two heavily-armed gunmen stormed the offices of Hebdo, long known for its provocative covers taking aim at French politicians and world religions, last Wednesday, killing 12 people. The paper had previously been firebombed due to its portrayal of the Prophet Muhammad.
click to enlarge 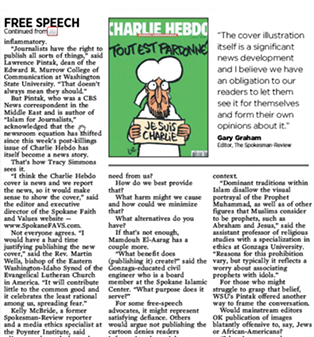 The resulting anti-terror demonstration after the massacre drew leaders from across the globe, and became possibly the biggest rally in French history.

Very few mainstream US media outlets republished the more provocative Charlie Hebdo covers, including one of Muhammad french-kissing a Charlie Hebdo cartoonist, after the attacks. Many Muslims consider illustrations of the Prophet Muhammad to be offensive, though the Koran does not explicitly forbid them, and several Muslim paintings from history have depicted him.

Some news outlets pixelated the covers, while others selectively cropped them. Some explained they censored the covers were for reasons of tact, while others cited concern for their freelancers in vulnerable places around the world.

Yet most US papers did choose to publish Charlie Hebdo's latest cover, compiled with surviving staff members in the offices of the French daily Libération. In the image, a crying Prophet Muhammed holds the now-iconic slogan of solidarity "Je Suis Charlie," while "All is Forgiven" is written in French above.

Yet Dean Baquet of the New York Times was an exception, drawing salvos from media critics and the paper's own ombudsman, who pointed out double-standards.

Political cartoonists, including Matt Bors at The Nib, have drawn their own cartoons of Muhammad in response, while others have drawn cartoons detailing their fear. Others, like the The Lego Movie directors, created their own homages to classic Charlie Hebdo covers.