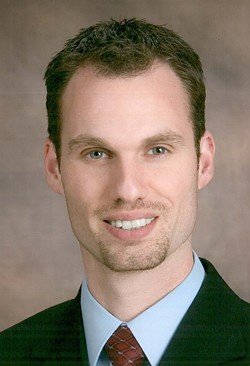 Former DSP President Mike Tedesco
Back in 2012, Mike Tedesco, for reasons that are still unclear, was fired as president of the Downtown Spokane Partnership, something he ended up suing for shortly after.

And for several years, Tedesco largely disappeared from the public eye. But now he's back, with a blog called "Spokane Planner."

"You know, it’s basically just a hobby," Tedesco says. "I’ve been fascinated with cities since I was a kid. Spokane being the chief most fascinating city among them."

A lot of the content in his longer pieces are drawn from his old college research papers at the University of Idaho and the University of Kansas. Yet the writing is lively, even exploring such dry-sounding topics as Spokane's economy and its slow population growth:


If not for generally favorable regional market forces, Spokane would easily be on par with such prosperous communities as Rochester, New York; Flint, Michigan; Youngstown, Ohio; and Scranton, Pennsylvania. The gods of economics have been charitable, however, and granted us the indispensable virtue of being a regional cosmopolitan and financial market center for a broad international geography. Thus, instead of suffering a fate akin to rustbelt communities of similar size, we’ve managed to glide on the contrails of metropolitan areas that have experienced rapid growth since 1990—Boise, Idaho; Colorado Springs, Colorado; Albuquerque, New Mexico.

He sees something symbolic in how long it took the city to find its "Near Nature, Near Perfect" slogan.


And now we come full circle back to “Near Nature, Near Perfect.” Dwelling on a simple city slogan may seem trivial but it’s emblematic of a larger challenge that faces the community. The scale of cause and effect accomplishments within Spokane’s political arena has diminished to a point of such insignificance that even fruit as low hanging as changing a slogan takes months of consensus building and, in the end, they still only get it half right and about a decade too late


Most interesting, however, is Tedesco's assessments of the political culture:


Of course, as any local will tell you, the financial and political trauma created by the River Park Square fiasco has yet to wane. The transaction wrought such a large degree of paranoia that Average Joe citizens will no doubt compare the next proposed public/private partnership to that of River Park Square and, worst yet, community leaders will no doubt continue to hesitate from entering into the next public/private partnership for fear of being chastised as creating another River Park Square. Thus, the political environment has diminished to such a state that any prospect of attracting significant investments is paralyzed by speculation and fear on both sides.

This comes as no surprise, however, because the puzzle that is Spokane politics is often an irrational one. The allogamy between people, organizations, business and political interests is fluid and often veiled beneath the surface. Veterans of the local political arena, in particular executive level public and quasi-public officials, choose their words wisely because expressing direct opinions that challenge the status quo, however irrational the status quo might be, is dangerous territory that may well end with a termination notice.


He's skeptical of the praise heaped upon the possibility of the north south freeway opening, and decries the "good-old-boy culture:"


Spokane is led by a stratum of leadership that’s generally a closed circle of individuals and organizations. They are the gatekeepers. They are ones who truly make the decisions. The leadership circle is relatively tight-knit and generally fastidious when it comes to outside perspectives and new ideas. Elected leadership is a sure-fire way to break into the circle and, from time to time, the circle will open and attempt to entertain new perspectives by hiring outsiders into influential positions.

Many from within the inner-circle have a lake place (more than likely on Priest Lake) and/or a ski condo (more than likely on Schweitzer Mountain). Many head to Hawaii in February or March. Most are members of the Spokane Club. They all know each other because they’ve been around for years.
...
Therefore, at public and quasi-public board meetings, inter-personal business interests always trump the public good.

Free thinking elected officials—city council members, mayors, county commissioners—are begrudgingly accepted into the inner-circle and quickly excused upon expiration of their term or failure to achieve reelection. Afterward, no doubt, they’re likely wondering where all their friends went.
...
In order to survive the political culture, which is mostly led by the community’s business elite, never be the first to express a strong and open opinion on any subject. Those that have taken similar risks know all too well that the assassin’s knife comes from the backroom, probably over vodka-sodas at the Spokane Club (and that’s not an exaggeration). This is the aggressive side of the culture


And he even hits upon sexism.


Traditionalism is also rank within day-to-day professional interactions. As any professional female in Spokane will tell you, misogyny runs rampant. Even women who are well accepted into the good-old-boy culture are not immune. I’ve enjoyed drinks with everyone from [Theresa] Sanders (Spokane City Administrator) to young, upstart female attorneys that I’ve known since childhood, and they all spin tails of bias and cat-calls courtesy of the good-old-boys


Tedesco promises his future essays will continue to explore such topics, but overall he says, he wants to be as positive as possible.

"We’re the only city that has a downtown with waterfalls for goodness sakes," Tedesco says, comparing Spokane to similar cities, like Boise, Colorado Springs, and Albuquerque. "They’re not smart-growth cities. They’re not renowned for being on the cutting edge of quality of life and walkability and smart growth planning perspective. Spokane is by far a superior urban environment to any of the [similar] cities."

It's just that those cities have managed to diversify their economy, capturing the young energy of the "creative class." And Spokane's still trying to figure that out.

He's already devoted a lot of space to celebrating the best parks in Spokane, with plans to tackle the best neighborhoods and the best bars in the future. "I want a 25 year old living in New York City looking for a place to stumble upon this," he says.

Next up, he says, he plans a big essay on the impact of the "economic geography" of the Spokane area as a regional hub. He promises he'll try to make it more exciting than that sounds.

Gonzaga beats North Dakota State and that's all that matters