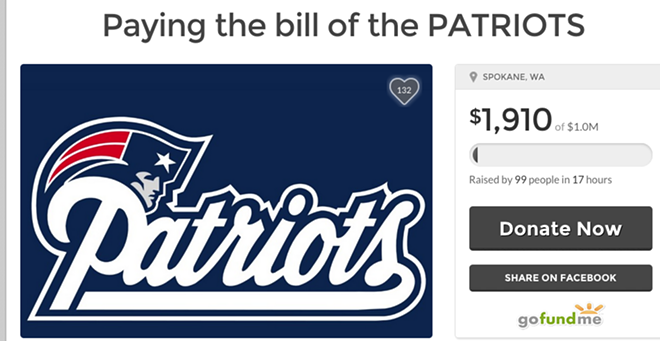 Cruising through any crowdfunding site reveals no shortage of wrong-headed, misguided or simply God-awful ideas, but this campaign posted yesterday to GoFundMe may take the cake. Someone who says his name is Michael J. Whitman and claims to live in Spokane, launched an effort to raise $1 million to cover the fine levied against the New England Patriots for their conspiratorial efforts to deflate footballs below league requirements.

And while there are no shortage of Tom Brady apologists in the world, the planet is not, however, populated with enough morons to donate to this cause, and this dude seems aware of that truth. Here's what he wrote on his site, which currently has just over $1,900 raised.


We obviously know we won't reach One Million Dollars, however we do believe the fine is bulls**t and want to help anyway we can. So whatever is donated will be donated to the New England Patriots in help with the fine! As we venture with this, we will do frequent updates to show progression of this! If enough is made to make the travel, we will fly down there (on our own expenses) and deliver a check in person!

There is so much idiocy spraying from this passage that reading it without protective goggles could forever alter your intelligence. First off, and most obviously — you're in Spokane and this is part of the Seahawk Nation, so start acting like it, Michael. But that's just the tip of this iceberg of ignorance.

How about the phrase "we want to help anyway we can." Really? You want to help an outlandishly profitable team owned by a man who probably has a million bucks absentmindedly tucked in the pocket of a fur coat he hasn't worn for a few years? That's where you think people should be spending their money?

You only have to click two or three times away from this moronic endeavor to find fully worthwhile fundraising efforts, even a page of Spokane-centric causes, including pages to raise money for a kid in need of a bone marrow transplant, a Whitworth student who wants to go to Guatemala on a goodwill mission, and a Spokane boxing team looking to head to the national championships.

Here's the full list of campaigns, almost all of which are more worthwhile than helping some dickwads on the other side of the country who cheated in a football game.