Dan Nailen
The Bartlett turned into a non-stop dance party Monday night from the opening notes of the English Beat, and given the average age of the folks in the crowd, I'm sure several of the fans on hand were reaching for the Advil this morning — I sure was — and not just because of downing a few too many pints.

The ska rhythms created by long-time leader Dave Wakeling and his five backing musicians were so insistent that resistance to the Beat was futile, and as soon as the band launched into "Rough Rider," arms and feet were flying as the band and fans both worked to recapture some of the magic the English Beat introduced to the world as 2-Tone revivalists in the early '80s.

There were a few bumps early on as Wakeling and Co. got used to the small stage and dealt with some echo-y sound that inspired Wakeling to say the first song sounded like a Lee "Scratch" Perry remix in his monitor. That issue quickly fixed by the sound guys, the Beat was off and running through a joyous set, the intimate venue only adding to the fun. After "Tears of a Clown," Wakeling compared the Bartlett to the Cavern Club, the legendary German basement venue where the Beatles honed their chops before going on to world domination, suggesting that maybe the band would follow the Fab Four's lead and "play eight sets."

I doubt anyone would have complained, although it was hard enough keeping up with the band for the nearly two hours they actually did spend on stage, ripping through classics like "Hands Off She's Mine," "Twist & Crawl" and "I Confess." With toaster King Schaschas harmonizing and rapping alongside in the role made famous by Ranking Roger in the original lineup, Wakeling led the way with his trademark teardrop-shaped guitar, kicking off each tune with the jangling chords that made the English Beat post-punk stars oh-so-long ago.

It's his voice, though, as strong as ever, that makes Wakeling's new version of the band a worthy ongoing entity. The musicianship is rock-solid, capable of shifting through all the different genres Wakeling's songs incorporate, from reggae and traditional ska to straightforward pop-rock and punk. Without that distinct voice in place, though, The English Beat would not be the same.

The set was dominated by songs fans have known by heart for decades — "Save It For Later," "Best Friend," "Can't Get Used to Losing You" — and punctuated by the occasional cover, including the Staples Singers "I'll Take You There" that Wakeling originally recorded as a solo artist, and the biggest hit from his post-Beat band General Public, "Tenderness." There was one new song, slated to be released later this year on a new album called Here We Go Love, and "The Love You Give" fit in nicely alongside the old songs.

By the time the band closed the show with "Ranking Full Stop" and "Mirror in the Bathroom," the crowd had thinned a bit, most likely due to exhaustion and a need to get back to relieve babysitters across Spokane. But there was plenty of energy left to give Wakeling and his band a proper ovation.

Here's the setlist from Monday night: 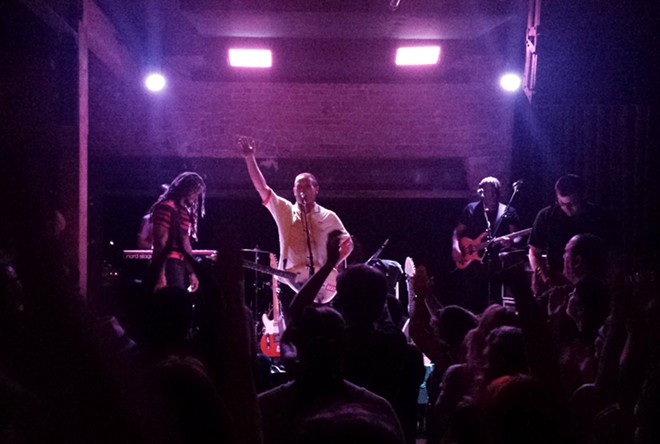