When you want to talk about police militarization, you talk to Radley Balko. Formerly with the libertarian magazine Reason and the Huffington Post, Balko now blogs about criminal justice at the Washington Post. Before Ferguson thrust police-militarization issues into the national spotlight, Balko published Rise of the Warrior Cop, a book detailing police history in the United States, revealing the use of heavy weaponry, riot gear, armored vehicles like the MRAP and SWAT raids.

Spokane County Sheriff Ozzie Knezovich is a military veteran himself, having served in the United States Army for three years. He was a training officer for the SWAT team. And in a presentation back in June, he called police militarization a "myth" — a central part of this week’s cover story.

Knezovich suggests that the region's history of homegrown-terror attacks justify such heavy-duty weapons and equipment.

Last Monday, before our cover story was out, I got a chance to interview Balko, and asked him to address a few of Knezovich’s arguments:

On whether the police have always been militarized

“If the standard for the militarization of police is the use of military weapons and equipment, how long has this so-called militarization been going on?” one slide in Knezovich’s presentation asks.

Knezovich goes on to cite the Winchester Repeating Rifle and the Colt Peacemaker. “I wonder how many people would be telling Wyatt Earp to send his Peacemaker back,” Knezovich says.

He also cites the Thompson Submachine Gun and the Browning Automatic Rifle, used in the 1920s. “Yeah, the Mafia used 'em too,” Knezovich says.

But the way that cops were armed was a bad thing during Prohibition, Balko argues. “That was a problem at the time, not something to recall fondly,” Balko says. (He sees a parallel between Prohibition in the 1920s and the drug war today. Both caused police to be more militarized)

As for the implication that little has changed, Balko’s book provides plenty of stats showing that, statistically, there’s been a dramatic rise in both SWAT raids and SWAT teams in small towns, despite the precipitous plunge in crime since 1995.

Many of the most horrifying stories from Balko’s book center on raids that go wrong. A SWAT team will come full force, knock down a door, throw in a flashbang, only to find that they’re at the wrong address. In one infamous case they killed the dog of the town’s mayor, after raiding his address incorrectly.

Balko's 2006 white paper at the CATO institute summarized it this way:

“The use of hyper-militarized, heavily armed police units to carry out routine search warrants has become increasingly common since the 1980s. These raids leave a very small margin for error. A wrong address, bad timing, or bad information can—and frequently does— bring tragedy.”

It’s the information from this paper that makes its way to Knezovich’s presentation.

“These are all botched SWAT raids,” Knezovich says, pulling up a slide of the CATO Institute’s map of botched raids, noting the information went all the way back to 1985. “It took 30 years to put all those dots on those map. I would challenge any business to have a failure rate as good as this, over 30 years.”

But Balko says Knezovich misunderstands the map. It was an attempt to show the breadth of botched raids, including this 2010 incident where the Washington State Patrol shot a pregnant woman during a drug raid in Spokane. But it was in no way an attempt to be comprehensive, or even to be an account of every recorded raid that went wrong. And many times, raids that go wrong aren’t reported. The victims of such raids can often be low-income people, already suspicious of law enforcement and media outlets.

“The vast, vast majority of the people these botched raids happen to don’t report it,” Balko says. “I don’t think we have any sort of grasp on how often that happens.”

On the use of armored vehicles

In his presentation, Knezovich details local 30 years of white supremacist groups using bombs and booby traps to justify the department's use of its MRAP.

While Balko agrees with Knezovich that there may be circumstances where the use of an armored vehicle would be warranted in a mid-to-large-sized city, he objects to how many of the military’s MRAPs have gone to small towns.

“We’re talking towns of 1,500 to 2,000 people,” Balko says. There are places like Post Falls (population 30,000.) The tiny Clearwater County, east of Moscow, Idaho, requested an MRAP “for “drug and marijuana eradication.”

The problem with such military equipment, he says, is that their presence and high maintenance costs creates a pressure to use them often. (Mother Jones outlines that some police forces have used their military-grade armored vehicles to police football games and to raid a no-kill animal shelter illegal raising a baby deer named Giggles.)

“You talk militarization, there it is. Baltimore,” Knezovich says, as he flicks through pictures of National Guard troops in Baltimore and Ferguson. “That’s militarization folks. Those are weaponized. That is a turret… ”

But there were many objections to the police response in Baltimore, including the gear the cops did use initially. This report also revealed that “officers were ordered to allow the protesters room to destroy and allow the destruction of property so that the rioters would appear to be the aggressors,” and that “the Baltimore Police Department would not respond until they [the protesters] burned, looted, and destroyed the city so that it would show that the rioters were forcing [its] hand.”

And in Ferguson, the riot gear and heavy equipment came long before any violence. In many cases, Balko says, militarized police equipment becomes a self-fulfilling prophecy.

“When police show up in the full riot gear, it tends to escalate tensions,” Balko says. “When you come expecting violence, you get violence."

In many cases, Balko argues that the police, especially those in small towns, don’t need some of the equipment they have. Non-military style equipment, like a bulletproof SUV, can function just as well as an MRAP in most situations, he suggests.

But more than the military style gear itself, Balko worries about the mindset it brings. Military-style weapons tend to foster a military style personality, he says.

“I think the problem is the training is moving the exact opposite direction it needs to be moving,” Balko says.

On blaming rhetoric for violence

But Knezovich’s central thesis, beyond simply a defense of police militarization, is to cast blame on some groups of anti-government critics, especially ones who lie or spread false conspiracy theories, for future incidents of violence. The critique is a familiar one: In the days after the Oklahoma City bombing, Bill Clinton cast blame on "the purveyors of hatred and division."

Balko condemns that genre of argument:

I think it’s ridiculous. I think criticizing the government is a pretty cherished and protected [freedom]. If somebody misinterpreted your criticism and it meant an unstable person does something violent, I don’t think the person making tepid non-violent criticism is responsible.

Environmentalists aren’t to blame for the Unabomber. Peaceful pro-life activists aren’t responsible for abortion clinic bombings. It’s a cheap way of shunting your critics to the fringes and lumping them in with violent people. 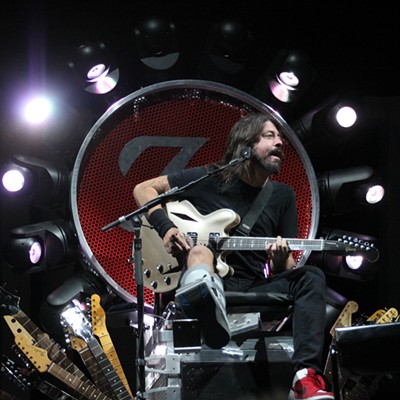