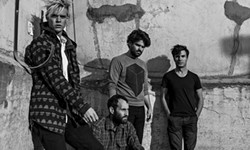 In our most recent issue, we wrote not only about the snarling post-punk and psych-pop of Calgary-based quartet Viet Cong, but also about the lingering controversy surrounding their name. Last month, the band announced it would be changing its name, though a new moniker has not yet been announced. Meanwhile, Portlanders are planning to protest Viet Cong’s show tonight at the Doug Fir Lounge. We haven't heard about anyone planning to protest tomorrow's Bartlett show.

The Inlander also conducted an email interview with the band that was more focused on Viet Cong’s music (which, of course, they sent to us after the print deadline had passed). Here’s that conversation, edited slightly for content and clarity.

INLANDER: (Bassist and lead singer) Matt Flegel has talked about his sense of humor, and Viet Cong’s music is fairly dark and noisy. Do you all regularly meet people who have the wrong perception of your personality?

VIET CONG: I think we've all met a few people that thought we were gonna be super dark people but it only takes a second of conversation to realize that this is not the case. We all do have a pretty dark (sense of) humour as a band and as people, which is part of the reason that I think we get along so well!

My favorite parts of the album are when the tension breaks and bits of poppy melody stick their heads out and smile. How cognizant are you guys of those moments: of their importance to the music, of their effect on the album's mood, and of making sure they happen? Do they come naturally as part of the songwriting process?

Pretty naturally, yeah. I think we're really trying to make pop music, in a way. We all just get bored really easily so we start to mess around with disfiguring it early on. We're always trying to put some hooks in there though.

Are there other bands — old favorites, influences, etc. — that you hear echoes of in those poppy, melodic moments? Not the noisy, nervy stuff around them, but those moments specifically?

David Bowie? Or maybe that Iggy Pop record The Idiot. I think that one has some great pop moments. Bowie, though, is always a good influence. I feel like every time I go back to him there's a whole new record of (great) music that I just hadn't found before.

You guys knew that Women (the defunct rock band of Flegel and drummer Mike Wallace) received some positive attention across North America and the world, so you must've had an inkling that people would care about Viet Cong. That said, did you expect the kind of attention the band has gotten?

No, definitely no expectation. I thought that we'd done the best we could but the whole process of recording it was really only about a week so it was really surprising that so many people have liked it.

Can you tell me how Calgary affects the music you make?

I think the winter in Calgary affects all the bands here. Also the seclusion I guess? Although it is a reasonably big city so that doesn't really factor in unless you want to tour lots. The scene is really quite good now, though, and there's a bunch of great bands. Lab Coast is a great band. I just saw Melted Mirror the other night and they were great. Sleepkit is another one to scope!

Lots of bands tout themselves as road warriors, but you guys seem to have been on tour non-stop forever. Do you still love it? Are you sick of it? Is it a necessity or a preference, as opposed to being home in Calgary?

I still love it!! We have been touring for almost a year solid. At this point, none of us have houses or anything anymore so I'm not really sure what I'm gonna do when we get off the road. We kind of have stuff pretty solid until the end of January when we're gonna take some time off, though.

So what's next for Viet Cong?

We have a bunch of stuff recorded already and we're gonna go rehearse and record a bit more the day after the Spokane show actually! The new stuff we've been working on has been a lot different! I dunno how though — just trying to make a strange-sounding record. Who knows though?

I assume you were waiting to hear from the Inlander to break the news of your new name, so feel free here to fill me in and I shall announce to the world!

We were waiting for you! Unfortunately though, while we have been brainstorming our new name, we haven't come up with anything that we're all happy with. We did sort of rush into the last decision and it turned out to be a bad decision so we're gonna make sure that this one is OK. Send us suggestions!

What do we want? HOVERBOARDS! When do we want them? TOMORROW!