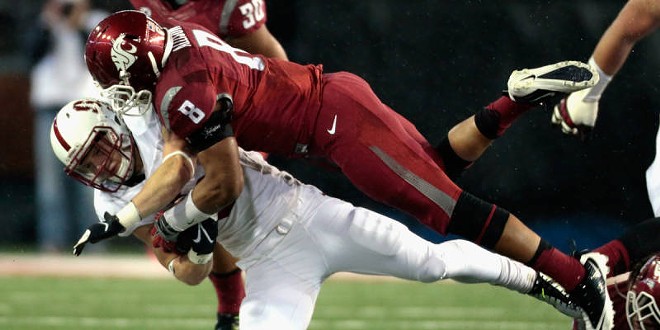 WSU Athletics
Washington State's D played big, nearly leading the Cougs to a huge upset.
Nice work making it through a very sports- and rain-saturated weekend and living to read about it this afternoon. For a lot of us, it didn't look like we'd survive for a while there. And in Pullman, there may still be some folks laying in the stands at Martin Stadium dreaming of what could have been. So let's start there.

THE UPSET THAT ALMOST WAS
So, if you haven't heard, Stanford, then the eighth-ranked team in college football, came to Washington State on Saturday in what was probably the biggest sporting event played in Pullman in the last decade. We'll go ahead and bank on that. For a while, it looked like maybe ESPN's College GameDay was going to come to town, but they decided to go to Philly instead for what turned out to be a hell of a Temple-Notre Dame throwdown. (Notre Dame won).

Yeah, there was some panic and wringing of hands about the fact that despite the hugeness of the contest, the game didn't sell out. Well, that's because if you live in Spokane and you have children or friends who invite you to parties or enjoy giving away high-fructose corn syrup to the anonymous masked children, you probably didn't want to hightail it down to Pullman on Saturday night. Oh, and the weather was monsoon-like, too.

So, here's the thing. The Cougars lost 30-28 in a game that they led for most of the 60 minutes. And they could have won. But here's our sports contributor Howie Stalwick on why that was not a bad loss. Yes, they did miss a field goal that would have made for the biggest win, by far, in the Mike Leach, era. But they did not, and I repeat, did not "Coug It." I know that didn't prevent you from descending into a candy-corn-and-whiskey quagmire after the game, but hey, the Cougs are turning it around.

EASTERN WASHINGTON REALLY HATES THE WIND
If you've been out to Eastern Washington University's campus from Spokane, you probably noticed that it always seems to be slightly windier and colder than in the city. This phenomenon has not been good for EWU's football team, which relies on quarterback Jordan West to be able to bomb it down the field to Cooper Kupp and other receivers...but mostly Cooper Kupp.

Even despite the wind, the Eagles were able to eek out a 14-13 win over Weber State. Our Max Carter was at the game and here are his thoughts on the contest.

IDAHO LOSES TO THE WORST TEAM IN FOOTBALL IN THE WORST WAY POSSIBLE
As I took my children from one stranger's house to the next on Saturday afternoon, I checked my phone for the Idaho Vandals score and it looked like they were going to beat New Mexico State for an almost shocking three-game win streak.

But then they Vandaled It. Up 40-21 with about 14 minutes left in the game, the Vandals then proceeded to give up 27 points down the stretch, eventually coming to a tie game at 48-48 at the end of regulation. Then, in overtime, the Aggies scored first and then this happened.
It's tough to blow a big lead like Idaho did, but it's really tough when it ends because some dude invented a way to catch a football with his feet. And, as if that wasn't bad enough, New Mexico State is the worst team in college football, having lost 17 straight games coming into the game. They are so bad that ESPN ran a story suggesting that the school should give up on football. At least they weren't embarrassed in front of too many people — only 7,546 people were in attendance, or at least that's the number that was reported.

THAT WAS NOT A BORING GAME
Apparently, I'm in the minority of Seahawk fans who didn't find yesterday's 13-12 win over Dallas mind-meltingly boring or sloppy or otherwise unsavory.

Sure, the Hawks could have turned a couple of those field goals into touchdowns and the offense, as a whole, could have been a little more cohesive, but if you go into the Cowboys' cathedral of absurdity and come out with a win, you should be happy. And shit, one of their guys almost got killed on a ridiculous hit, so we'll take what we can get.

That hit on Ricardo Lockette made for one of the most heart-stopping moments of the season for any Seahawks fan. For a while, the guy didn't even move. But there was some sweet relief when he put his hand up to salute the Legion of Boom while being carted off the field. Lockette isn't out of the woods yet, though. He is still in Dallas where he'll undergo neck surgery that will keep him out for the rest of the season. That's a bummer, but it could have been worse.

The Seahawks have a bye week coming up, so spend Sunday with your family or go to a movie or do whatever it is you do when you don't have to worry about the Seahawks losing.