Pot is becoming more legal. But the kids are alright (mostly).

Despite state marijuana laws becoming increasingly relaxed, there are fewer teenage potheads in the U.S., according to the results of a survey conducted by researchers at the University of
click to enlarge 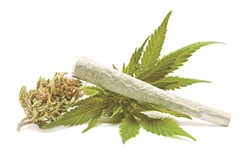 Since 1975, the Monitoring the Future survey has probed the attitudes of middle school and high school students regarding drugs, alcohol and tobacco use. This year’s results found that in 2014 students in grades 8, 10 and 12 were less likely to use marijuana over the course of their lifetime, the last year and the last 30 days.

“This finding is unexpected in light of the positive publicity marijuana has received in recent years prior to the data collection in 2014, with several states allowing medical marijuana use and two states (Colorado and Washington) legalizing recreational use for adults,” reads the report.

The study also found that the proportion of 12th grade students who thought that marijuana use should be treated as a crime is at the lowest level ever recorded by the survey at 17 percent. Despite their more permissive attitudes toward pot, the survey still found that the number of students who are daily users of pot has decreased.

“In 2014 the prevalence of daily marijuana use declined in all three grades, with a significant decline in 10th grade,” reads the study, which calls for more research to analyze why use of the drug has not increased over the last few years. “The 2014 daily prevalence levels in grades 8, 10, and 12, respectively, are 1.0%, 3.4%, and 5.8%.” 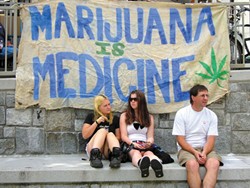 The number of marijuana retail stores in Washington could rise by 222 to ensure that medical patients have access to the drug.

The Washington State Liquor and Cannabis Board has received a recommendation from staff to raise the current cap of stores from 334 to 556, in response to an overhaul of the state’s pot laws. Earlier this year, Gov. Jay Inslee signed SB 5052, a bill that merged the state’s largely unregulated medical market with its recreational one. The legislation drew criticism from medical marijuana advocates that it would shut medical marijuana dispensaries and that patients would be ill served by getting their medicine from recreational stores.

First priority for licenses will go to applicants who sought a retail license prior to July 1, 2014, or were employed by a dispensary prior to 2013, have maintained a state and local business license and have paid taxes. The second priority will go to applicants who operate or were employed by a medical dispensary prior to 2013 and maintained business licenses and paid fees.

So far, the board received 1,194 retail applicants, 39 or which have been determined as meeting the first priority and 42 having been determined to fit the second priority. The board will also seek to increase the number of licenses in 10 counties with the highest medical sales. Seventy recreational stores have received an endorsement to sell medical marijuana.

Congress again tells feds to back off medical marijuana

The congressional appropriations bill to fund the government will renew language to prevent federal law enforcement agencies from using their resources to interfere with states that have enacted medical marijuana laws.

“The renewal of the Rohrabacher-Farr Amendment suggests most members of Congress are ready to end the federal government’s war on medical marijuana,” said Robert Capecchi, director of federal policies for the Marijuana Policy Project, in a prepared statement. “There’s a growing sentiment that the Justice Department should not be using taxpayer dollars to arrest and prosecute people who are following their states’ medical marijuana laws.”

When the language was first approved, it gave hope to medical marijuana patients facing federal drug charges that their cases would be dismissed. But the U.S. Department of Justice determined that the language was sufficiently vague enough to continue these prosecutions, notably against the Kettle Falls Five, an Eastern Washington family convicted of federal drug charges.

Pot advocates have called on Congress to enact the CARERS Act, which they say would bring a more lasting solution to conflicts between federal and state marijuana laws.

Star Wars, more weed shops (maybe) and other news you need to know