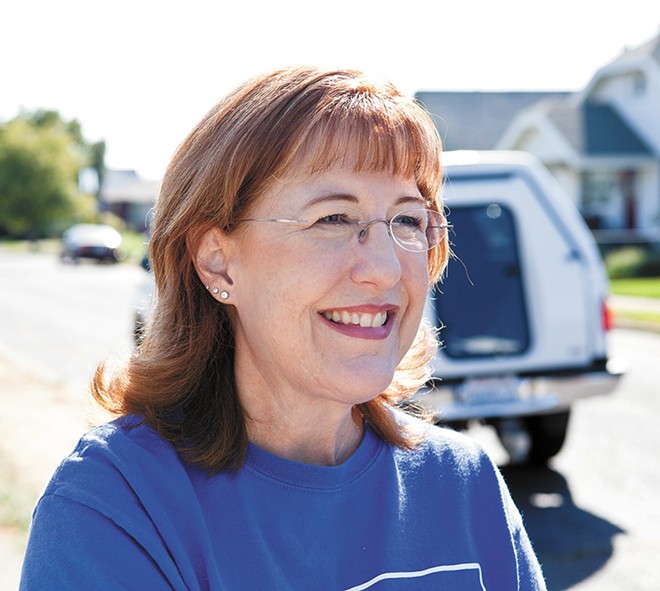 On Monday, former Spokane City Councilwoman Nancy McLaughlin sat down with her husband and they made up their minds: McLaughlin would submit her name to become the next Spokane County Commissioner.

Years ago, rumors circulated that Spokane County CEO Marshall Farnell would retire, commissioner Todd Mielke would take his place, and then McLaughlin would slide into Mielke's open slot. It hasn't quite worked out that way — Mielke narrowly lost out on the Spokane County CEO job and found a job as the GSI CEO instead — but the impact on the board might end up being the same: McLaughlin, once an ally of commissioner Al French when they both served on Spokane's city council, serving on the board of county commissioners.

McLaughlin had previously run against State Sen. Andy Billig in 2012 but was defeated handily.

"Living in the 3rd legislative district, my choices are plenty limited," McLaughlin says. "It would take a ton of money to get this seat. Unless the state Republicans are going to make that a priority, I don’t see things changing."

But with Republicans dominating the Board of County Commissioners, McLaughlin has a much better chance of retaining her seat this November if she's appointed. And she says that, of the candidates who've announced they're running, she's clearly the best choice.

Her eight years on the Spokane City Council, she says, gave her a crucial sense for the interplay between the city and the county.

"I know a lot of the players. I understand the dynamic between city and county government," she says. "I'm passionate about making the county and city work together well... I don’t like [the times] that we’re suing each other. At times, we’re suing ourselves! I’m all about trying to play nicely."

On the other hand, the current commissioner with city council experience, French, has occasionally been the one stoking conflict between the city and county in recent years. McLaughlin was a big fan of French when they served together on the council.

"I really think that he was the one who taught me the most about local government, especially around land-use issues," McLaughlin says.

Land use, in fact, has been an item of considerable contention between the City of Spokane and Spokane County in recent years. At times, the county has run afoul of the Washington State Growth Management Act for how it has handled its expansion of its Urban Growth Area, the boundaries limiting where dense development can occur.

"I am not a lover, at all, of the Growth Management Act," McLaughlin says. "I think it limits our ability to grow our tax base. I understand there needs to be a balance so we don’t go hog wild and lose control. But I think it’s too tight."

She suggests joining with other cities and counties to lobby for changing state law to allow municipalities to grow more easily.

McLaughlin doesn't agree with every position of French, however. French fervently opposed the proposition this year that would have added two more commissioners to the board, but McLaughlin says she voted to support it.

"I’ve probably changed my mind about that over the years," McLaughlin says. "We're a large enough county [to support more commissioners."]

She notes that, while serving on city council, she joined with more liberal councilmembers Richard Rush and Jon Snyder against some of her fellow conservatives to oppose spending $4.3 million of conservation futures funds money to buy a small parcel of Riverfront where the YMCA once sat.

"Having spent eight years in a non-partisan position as a Republican, I consider myself a very conservative but independent Republican," McLaughlin says.

What went viral locally in 2015