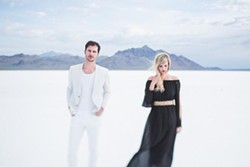 The Sweeplings continue to make a name for themselves.

And now it’s time to update you all on the music career of Spokane's own Cami Bradley.

Yes, the America’s Got Talent sixth-place finalist only continues to make headway with her cinematic folk-pop duo, the Sweeplings. Earlier this week, Billboard.com unleashed the Sweeplings newest music video for "Under Your Spell," along with a profile article on Bradley and her music partner Whitney Dean.

So far 2016 has treated the act kindly, with a recent sold-out show in Huntsville, Alabama — where Dean lives with his wife Bethany — multiple radio appearances and a music video feature on Ditty TV, an Americana music TV platform.

Last year, along with releasing their debut album and performing around the country, the band’s song “Carry Me Home” was featured on NPR’s All Songs Considered and iTunes later named the track one of the Top 25 singer-songwriter songs of 2015. Also, Spotify included "Snow May Be Falling" on its Acoustic Christmas playlist in December.

Yet with all of the accolades, Bradley and her husband Eric still have no plans to leave Spokane. However, that didn’t stop the pair from searching out a second home in Alabama. They were recently seen on FYI network’s Tiny House Hunting show purchasing an especially small house in Huntsville. Now the band can more easily get together.

Look for a national tour in the near future as well as more music, potentially collaborating with John Paul White of the Civil Wars (which this band pulls many comparisons to). The Sweeplings have come a long way from when we first profiled them in 2014.

Our next Suds and Cinema brings food, beer and film together