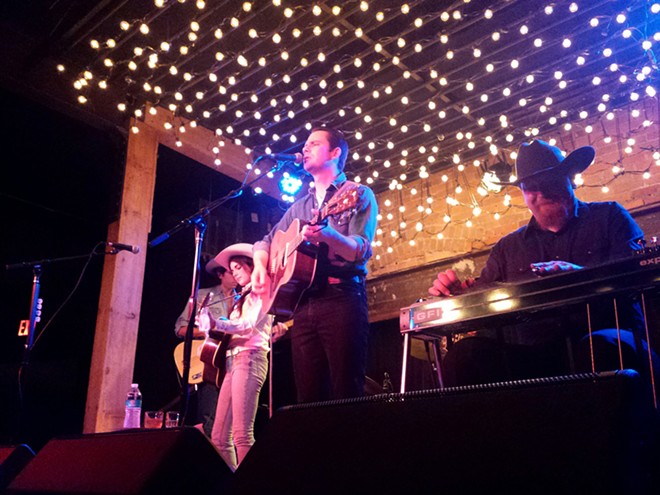 And with that proclamation — delivered firmly tongue-in-cheek as the first of many funny one-liners between songs — Sam Outlaw was off and running, delivering what he promised with a heavy dose of songs from his excellent Angeleno album.

That collection, produced by Ry Cooder, is saturated with what Outlaw calls "SoCal country" vibes, but live at the Bartlett, the songs came through more raw and straightforward. The lack of mariachi horns and strings weren't felt a bit, as Outlaw's more-than-capable band backed both the lanky frontman and opening act/harmonizing vocalist Whitney Rose with energy and proper, pedal-steel-fueled style.

Outlaw's strong vocals, delivered sans the Southern drawl you might expect from a "country" artists, came through loud and clear right from the set-opener "Who Do You Think You Are?" and continued through an hour til the show-closing "Keep It Interesting."

In between came a series of excellent performances of songs like "Ghost Town," "I'm Not Jealous" and his album's title track, punctuated by often-profane and always-amusing between song banter between himself and the audience, with Rose often playing along. He introduced his "Jesus Take the Wheel (and Drive Me to a Bar)" by declaring it had nothing to do with the Carrie Underwood song with a similar title. And he had to write "Hole Down in My Heart" by playing a role, he explained, because his real girlfriend "is actually really nice to me."

Outlaw has more than a little Dwight Yoakam in him, particularly in his swiveling hips when the band is going through a vibrant instrumental section, and his songwriting chops are undeniable after seeing him perform. One of the highlights of his set, though, was actually a cover he did of Patty Loveless's "Blame It On Your Heart," delivered as a duet with Rose. That one got some dancers on the floor two-steppin' up a storm.
click to enlarge

Dan Nailen
Whitney Rose, left, had Sam Outlaw as part of her band during her opening set.

Rose won't be an opener for long; her opening set was utterly engaging. Between her "aw shucks" humor, stage attire that's reminiscent of Toy Story's cowgirl Jessie, and songs that sound like they're pulled from traditional country's heyday, she was a joy to watch perform songs from her new Heartbreaker of the Year album and self-titled debut.

"Little Piece of You," "My First Rodeo" and "Chivalry is Dead" were all excellent, and her between-song banter was on par with Outlaw's, as when she described "Only Just a Dream" this way: "I wrote that about unhealthy coping mechanisms. But then, what song isn't?"

Her cover of Tom T. Hall's "That's How I Got to Memphis" elicited a loud cheer from some of the older country fans on hand, and she welcomed Outlaw — hiding in plain sight as her band's rhythm guitarist — to step up for a duet on George Strait's "One Night at a Time."

Outlaw and Rose's shared turns on vocals went down as easily as the whiskey drinks both appeared to sip on through their respective sets. And if hitting the whiskey between songs of heartbreak and hell-raising ain't country, I don't know what is.

Locals Cursive Wires opened with a quick set at the Sam Outlaw/Whitney Rose show, one of a few country-tinged gigs at The Bartlett of late. Tonight, fast-rising star Anderson East headlines a sold-out show, Brothers Comatose brought their bluegrass tunes earlier this week, and a new series dedicated to traditional bluegrass and acoustic music, NW of Nashville, got its start in February; the second edition happens on March 29.