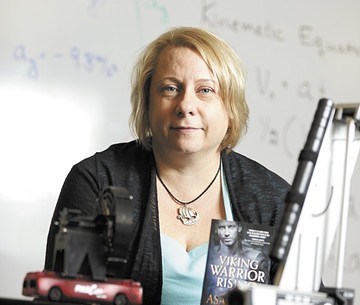 Presented by the Romance Writers of America, a trade association for writers in the genre, the RITA award is the most distinguished honor in romance fiction. Twelve categories recognize long and short works, and those in the various sub-genres of romance. The RITAs have been presented annually since 1982, expanding in the number of categories over the years.

Bradley's novel, the first in a planned trilogy, was published last fall by Sourcebooks. Influenced partly by her upbringing in Sweden, the action-filled story follows a female super-soldier protagonist who meets a hunky, immortal Viking sent to Earth with a band of fellow warriors to protect humanity from the end of the world; Ragnarök.

More than 2,000 novels are entered annually in the RITA competition, and this year Bradley's novel was chosen as a finalist in not one, but two categories: Best First Book and Best Paranormal Romance.

This year's RITA Award winners are to be announced at a formal ceremony in July during the Romance Writers of America's annual conference.