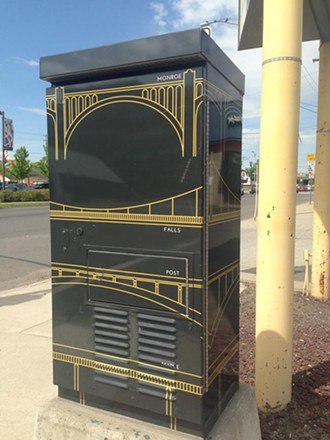 Spokane Arts
This wrap by Morgan Rose Lynch is at Third and Walnut.
After putting out the call for local artists to submit their work earlier this year, Spokane Arts recently began installing the second set of public art on traffic signal boxes around the city.

The theme of the latest project is "Flash-back / Fast-forward: The chronicle of Spokane's history and industry."

The signal box art program is one of many recent or ongoing public art projects organized by Spokane Arts. A call for submissions for new downtown sidewalk tree grate designs is still open through June 12. Another to create mobile murals for Riverfront Park, similar to efforts in the fall of 2014 to brighten up an empty downtown lot, is also open through May 25.

The second round of signal box art was made possible in part by Spokane Arts, STCU, the City of Spokane, Downtown Spokane Partnership and Standard Digital Print.

Below is a list of whose work is featured at which intersections for the project's second phase; see all the local signal box art in an album on Spokane Arts Facebook page. 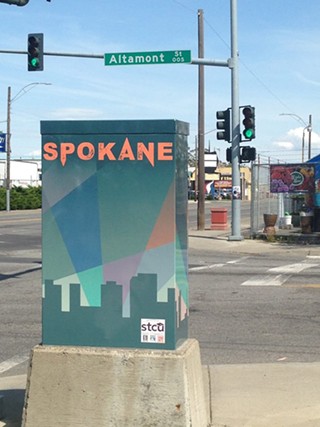 Shea cleared, Straub investigation putters along and news to start your day