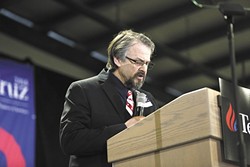 Young Kwak
Pastor Tim Remington was shot six times in the parking lot of the Altar Church in March
In other news:

Back to church
Pastor Tim Remington, who was shot six times in March before the alleged shooter, Kyle Odom, was caught and arrested in Washington D.C., returned to Altar Church in Coeur d'Alene yesterday to deliver his first sermon since. (KXLY)

Beating the heat
If you haven't noticed, its hot outside. According to the National Weather Service, we should hit a record-breaking 96 degrees today, and 94 degrees tomorrow.

Bomb trains
An oil train derailed near the Washington and Oregon border on Friday and caused a massive fire. A track failure was responsible for the derailment, according to Union Pacific Railroad. Sixteen cars in total derailed out of 96, and four caught fire, and the incident has damaged essential city services in Mosier, Oregon. (Associated Press)

Greatest of all time
Muhammad Ali died Friday at the age of 74, and the world is now remembering the legend, not only for his time in the ring, but also for his contributions outside of it. (New York Times)

Hostile environment
Two journalists, including a photojournalist for NPR, were killed in a Taliban ambush Sunday during an embed with local troops in Afghanistan. (Reuters)

Getting closer
Hillary Clinton won the Puerto Rico primary on Sunday, making her that much closer to clinching the Democratic nomination, which is expected to happen Tuesday during primaries in several states, including California. (NBC)

Cops can chase drunk drivers from Oregon into Washington, but not vice versa