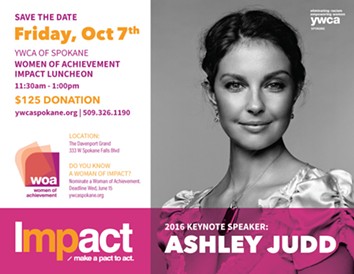 Later this fall, the YWCA of Spokane will honor a group of six outstanding women in our community during its 35th annual Women of Achievement IMPACT Luncheon.

The event is set for Friday, Oct. 7, and this year's keynote guest speaker is actress and humanitarian Ashley Judd. Before this year's group can be honored for their contributions that make the Inland Northwest a great place to live, organizers want to hear from the public on whom they feel deserves recognition for their tireless work.

A deadline for nominations for the Women of Achievement Awards has been extended from June 15 for several weeks, to July 11. When making a nomination, consider that winners of the award "embody the mission of the YWCA by giving generously of themselves to make Spokane a better place for all citizens to live," according to the award's website.

Nominations can be made in one of the following categories: arts and culture, business and industry, social justice, community enhancement, education; science, technology and environment.

Proceeds from the awards luncheon, for which tickets are $125, benefit the domestic violence programs and services of the YWCA of Spokane.

If you can't attend the event as a guest, also consider signing up to volunteer for the largest fundraiser of the year for the YWCA.

Heroin in small town America, House Democrats stage sit-in for gun control, and there's an alligator loose in the Valley