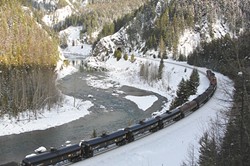 ON INLANDER.COM
IN OTHER NEWS
DEMOCRATIC NATIONAL CONVENTION