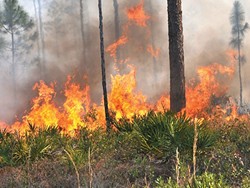 Wildfires are surrounding Spokane
ON INLANDER.COM

Wildfires in Spokane
Three fires surrounding Spokane burned more than 13,000 acres, destroyed homes and forced evacuations yesterday and continue today. (Spokesman-Review)
Woman shot in the head
A woman was shot in the head at a Spokane motel on Sunday night but is expected to survive, according to police. The suspect is at-large. (Spokesman-Review)

Cyclist injured in Idaho
A 65-year-old cyclist was seriously injured when hit by a car in Kootenai County on Sunday afternoon. (KHQ)

End of Olympics
The Rio Olympics are over, and Team USA, by far, took home the most medals. But that was expected, and these games may actually come to be defined by the lies of Ryan Lochte, the swimmer who can't even endorse Speedo anymore. (Washington Post)