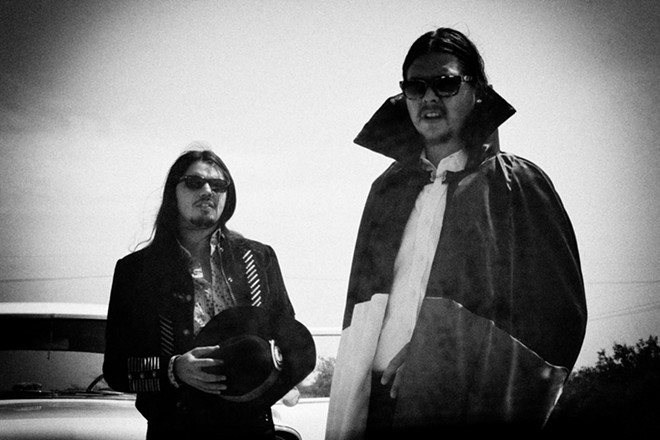 FRIDAY
Ghostland Observatory’s Aaron Behrens and Thomas Ross Turner create pop music, sprinkled with glorious flashes of rock and soul, that will make you dance long into the night. Their shows often employ laser lights and flashy capes, and their steadfast fans are beyond ecstatic that they’re back from a hiatus. The Austin, Texas, duo is currently out on tour, one of their first since 2012, when they stepped away from the band (Behrens pursued a side project), only playing a few select shows here and there over the years. They’re playing the Knitting Factory Friday night starting at 8 pm. Who knows when they’ll be here next? You probably should go.

SATURDAY
Girls do rock! And the Girls Rock Lab is a local program set up specifically to help give girls the opportunity to set free their rock ’n’ roll sensibilities. Through week-long workshops, volunteers work with girls ages 8 to 16, helping them write songs, start bands, practice and perform, all in a safe and collaborative environment. On Saturday at 7 pm, participants share the Bartlett stage with talented local female bands Mama Doll, Phlegm Fatale, Windoe and Violet Catastrophe for a final showcase. While the show is free, donations to the program are encouraged.

Bringing in headliners Afroman and Bowling for Soup (who doesn't want to relive the early 2000s?) is the largest Green Fest yet, going down at Black Diamond in Spokane Valley. The event also includes more than 20 local punk and rock acts beginning at 11:30 am. Cost is $20.

Pat Benatar and her guitar-playing husband Neil Giraldo, are back in to prove that they do indeed belong together. Their Northern Quest show starts at 7:30 pm Saturday, with tickets starting at $45. Opening for the pair is super awesome rocker Melissa Etheridge.

Singer-songwriter Zakk Wylde is a man of many musical hats — including his rock band Black Label Society, a Zakk Sabbath tribute act and his softer-side solo project, which comes through the Knitting Factory Saturday. Read our preview article on him right here.

SUNDAY
When Minus the Bear last came through Spokane to headline Elkfest 2014, the crowd was rowdy. The band's not-too-heavy, progressive math-rock sound was greeted with a surprising fan reaction — people started crowd surfing, much to the chagrin of some in mellower moods. This just shows that somehow, Minus the Bear has created a sound that's both entertaining and thought-provoking. They're a band that Northwest music nerds and frat boys alike can agree on. They play the Knitting Factory Sunday at 8 pm. Read our full preview article on the band right here.

Z Nation crew shooting around Spokane, including in Inlander's backyard