Piñateria Ramirez
Despite promises made by Sean Hannity, Trump is not actually filled with candy
ON INLANDER.COM

The cost of firing gently encouraging the resignation of a police chief
We've updated our tally of the cost of the city's legal defense and independent investigation into the forced resignation of former Police Chief Frank Straub: The price tag is already higher than it cost paying Straub's base salary across all three years of his tenure.  And that's for a lawsuit that a judge determined was groundless.

Pardon?
No, but close. Obama has commuted the life sentence of a Spokane meth dealer to 20 years. [Spokesman-Review]

The Rich Kids Across The Lake
Why the wealthy tenants near Camp Lutherhaven are tut-tutting a big boat garage they find unsightly. If something isn't done, they're threatening to escalate matters to tsk-tsking. [CDA Press]

The Trumps are going to Mexico!
In a last minute decision that shows just how fun and spontaneous Donald Trump can be, the presidential candidate who's spent a year insulting Mexicans is heading to Mexico to meet with the Mexican president. I just watched the second season of Eastbound and Down so I'm assuming Trump's trip will be exactly like that, with Sean Hannity playing the Stevie role. [Washington Post]

Neo-pros and Neocons
Cindy Sheehan, the anti-war leader against George W. Bush isn't much of a fan of hawkish Hillary Clinton either. [Independent Journal Review]


The AV Club's resident Stephen King scholar Zack Handlen has a touching essay about the power of horror — and nostalgia — in Stephen King's IT.  [AV Club]

Indigenous Peoples' Day, alien signals and headlines for your Tuesday 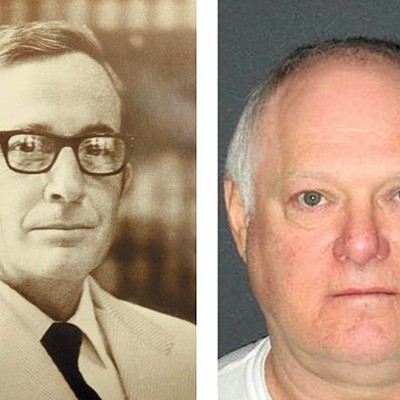