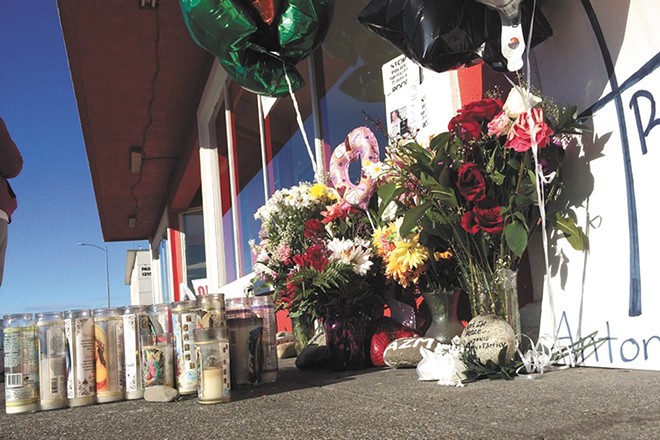 A memorial for Antonio Zambrano-Montes, a man who was shot by Pasco police
ON INLANDER.COM

• NEWS: A new study finds that your parents and grandparents are more likely to toke up than teenagers.

• InHealth: How to get information at your fingertips, sewage stories, aiding UNICEF through a math game and more in our weekly health roundup.

• Case closed on Pasco police shooting
Washington's attorney general says he agrees with a local prosecutor's decision to not file criminal charges against the three Pasco police officers who shot Antonio Zambrano-Montes, a man who was throwing rocks at officers. His death sparked local and national controversy. (Tri-City Herald)

• Daiquiri Factory evicted
The city of Spokane has slapped an eviction notice on the front window of the troubled bar owned by Jamie Pendleton, a businessman who is accused of committing identity theft to apply for a liquor license. Pendleton needs to come up with $14,000 or be evicted. (KHQ)

• Idaho seeks to regulate ""
The Idaho Transportation Department is looking into revising its rules regarding "," oversized trucks carry large industrial equipment. These shipments became an issue in 2010 and 2011 when oil companies received permits to ship massive equipment from Lewiston to Montana. (KXLY)

• Wells Fargo fined over fake accounts
Banking giant Wells Fargo has been hit with $185 million in penalties after federal regulatory agencies found that employees of the company had secretly signed customers up for banking services without their consent. The Consumer Financial Protection Bureau says it issued its largest penalty ever to Wells Fargo.

Study: Your parents and grandparents are more likely to toke up

THIS WEEKEND IN MUSIC: Storytellers at St. John's, Fly Moon Royalty and more