NEWS: Former city attorney Nancy Isserlis is digging into the Straub investigation, and more specifically, into investigator Kris Cappel herself.

TV: Our own Chey Scott really thought she would like Netflix's Jonathan Strange & Mr Norrell. But in the end, she was let down.

Football priorities
Following three felony arrests of WSU football players last week, and the media attention sparked by coach Mike Leach's accusation that his players are being targeted by police, and the fact that apparently none of those players have been disciplined by the team at all — one player has been expelled by the school and still played on Saturday — WSU president Kirk Schulz says the school may reconsider how it handles athlete arrests. Of course, that can't happen until after the season. (Spokesman-Review)

Budget plan
Mayor David Condon wants to address property crime in Spokane, so he's calling for an increase of 16.3 percent in funding to do so in his 2017 budget plan. And it's a budget the Spokesman-Review really wants you to click on, apparently, since the entire body of the article links to it. (Update: they fixed it) 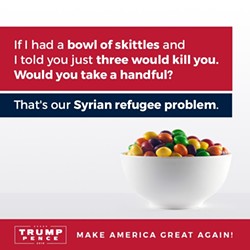 The image tweeted by Donald Trump Jr. yesterday
Skittle controversy
Donald Trump Jr., remarkably, may be getting more media attention than his father this morning (but probably not) because of a tweet. The tweet had a picture of a bowl of Skittles, and asks, "If I had a bowl of skittles and I told you just three would kill you. Would you take a handful? That's our Syrian refugee problem." This has caused outrage because, as many have pointed out, refugees are not pieces of candy.

Terror suspect found
Ahmad Khan Rahami, the suspect in bombings Manhattan and on the Jersey Shore, was caught yesterday following a manhunt.

Shooting of an unarmed black man
Video surfaced yesterday of a white Oklahoma police officer shooting and killing a black man who can be seen walking away from officers with his hands up seconds beforehand. The officers were responding because the man's car had stalled.