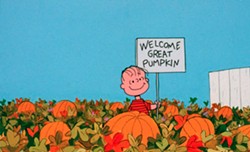 Cry (for the) Wolf
Washington wildlife managers shot and killed another gray wolf, part of the Profanity Peak Pack in Ferris County. The frisky critters had been killing livestock in the area early last week. (KXLY)

That's going to make one giant pie
A 1,713-pound pumpkin won the Great Pumpkin Weigh-off in Georgetown over the weekend. No word on how many of those damn pumpkin-spice lattes at Starbucks that bad boy could flavor up. (KREM)

Entrepreneurs welcome
A look at the efforts of the University District to become an innovation hub.  (Spokesman-Review)

Say what?
The New York Times delved into Donald Trump's taxes, and the possibility he hasn't paid any federal taxes for nearly two decades. It's amazing what losing a vast amount of money — $916 million in 1995, to be specific — can help you do in avoiding taxes.

Keeping up with the Kardashian robbery
Kim Kardashian was robbed at gunpoint in Paris, with the intruders at her exclusive apartment apparently getting away with $10 million in jewelry. Undoubtedly traumatic for the reality-TV star, it also caused hubby Kanye West to stop his Chicago concert early. (CNN)

Reduce, reuse, recycle
The Nobel Prize in Medicine was awarded to Japanese biologist Yoshinori Ohsumi, who discovered a key mechanism that allows some cells to recycle themselves in the human body's defense against all manner of diseases, including Alzheimer's, cancer and diabetes. (Washington Post)