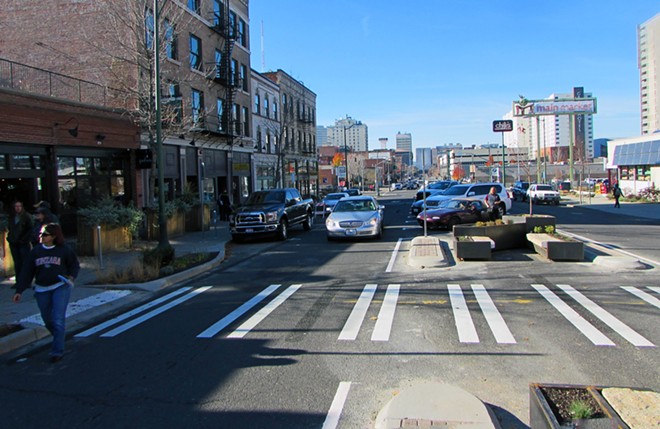 Daniel Walters photo
The new Main Avenue parking pilot adds parking to the center of Main, slowing down traffic and making crossing easier for pedestrians.
There are roughly two schools of thought when it comes to traffic engineering: There's the traditional school, which focuses on speed and convenience for automobiles — focused on parking lots and wide lanes getting cars as fast as they can for point A and point B.

And then there's the new urbanist school, which wants to create a sense of place with walkable neighborhoods. They often decry parking lots and wide lanes, arguing that they drive sprawl, speed and automobile use.

Consider the $160,000 parking experiment on Main Avenue between Division Street and Browne Street as a melding of these two schools of design. The project adds parking spaces in the center of the road, but in doing so, slows down traffic and makes the area better for pedestrians.

For the nearby businesses, it's been a double win. Not only do the new parking space give customers more places to park, but traffic slows down, making it safer for pedestrians to cross.

Here's a paragraph from the city's press release about today's celebration of the project:


Most distinctive is the addition of center-lane angle parking and a mid-block pedestrian crossing on the block of Main from Browne to Division. In all, the project has provided 21 new auto and eight motorcycle parking spots. New landscaping, safer pedestrians crossing areas, and pay-by-plate parking kiosks are also part of enhanced streetscape.

If you want a more detailed description of the project, check out this graphic here.

"It's all working really well. I think we're happy about how it's going," says Marlene Feist, the city's utilities spokeswoman. "We're getting a lot of positive feedback. Main feels like a pedestrian-first location."

Feist says it hasn't created a congestion problem either.

"It slows it way down, for sure," Feist says. "But we haven't had any complaints about using the spaces in the middle."

This stretch of Main, which is filled with bars and restaurants and stores, wasn't much of a commuting corridor anyway, she says.

"This block has really become a web of activity — of 24-hour activity," Feist says. "I think people are used to having a lot of people walking around here. I don't think they were going super-fast anyway. Now we've just enhanced the pedestrian environment around here." 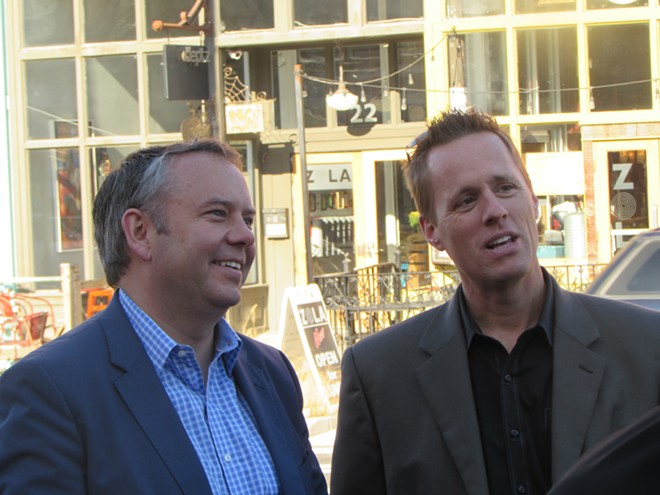 Daniel Walters photo
Mayor David Condon speaks with Scott Simmons, the director of the city's public works division.
Angled parking is not new in Spokane. It's already been used on Lincoln Street outside of City Hall and next to Jack & Dan's Bar and Grill near Gonzaga.

"This is another application to be responsive to immediate neighbors," Mayor David Condon says.

But the design as a whole, with angled back-in parking in the center lane, that's very new.

"We're the first in the state," Condon says. "It takes a lot for our traffic engineers to get their arms around this."

He glances over at the median, where trees grow out of planters.

"I love the re-use of the old curbs they put in, the granite curbs," Condon says. "Yeah! It's cool!"
click to enlarge 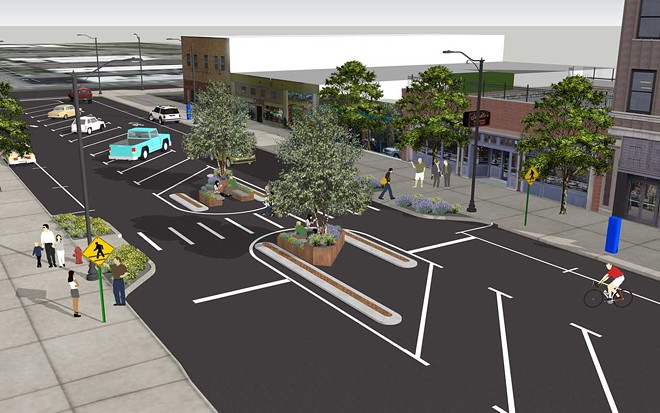 City of Spokane rendering
A rendering from back in May laid out the Main Avenue redesign.
One of the crucial tests of the pilot has been the feedback to the Downtown Spokane Partnership.

DSP has been caught in the middle of the battle between the east side of Main downtown — where business owners like Merlyn's owner John Waite have pushed to change the street to a two-way — and the west side, where big businesses like River Park Square have opposed it.

If there were any complaints from downtown businesses about parking changes to Main, in other words, DSP President Mark Richard would have heard them.

"I haven't heard anything negative. Exactly the opposite. So far it's all been positive," Richard says. "I'm hearing from the folks here it's really helping.

Not only has it added more parking spaces for businesses, it's already improved the vibe of the neighborhood, he says.

"It's helping position more people to shop and dine and stay longer," Richard says. "It's doing what we've planned. ... It was almost like a passthrough — but now it's like a destination."

He says he's heard positive things from people outside the downtown as well.

"[One East Sprague business owner] specifically said, 'I really love what you guys are doing downtown. In fact, I love that new parking schematic on Main,' Richard says. "So people are noticing. And the feedback is positive."

He says he'll be watching closely during the busy, snowy holiday season. But so far, one big concern — the possibility of accidents from drivers unfamiliar with center-lane — hasn't materialized.

"I don't think I've heard of one accident so far," Richard says. "I'm sure it's got people perplexed... but so far so good."

Good enough to be used elsewhere?

"We've got to wait and see. It is a pilot," Richard says. "What we find is what we're hearing early on, is that it's a good thing. We're definitely going to find other neighborhoods who might have an interest."

He says already heard from other businesses on the western half of downtown who are interested in using angled-parking to create a better sense of place. 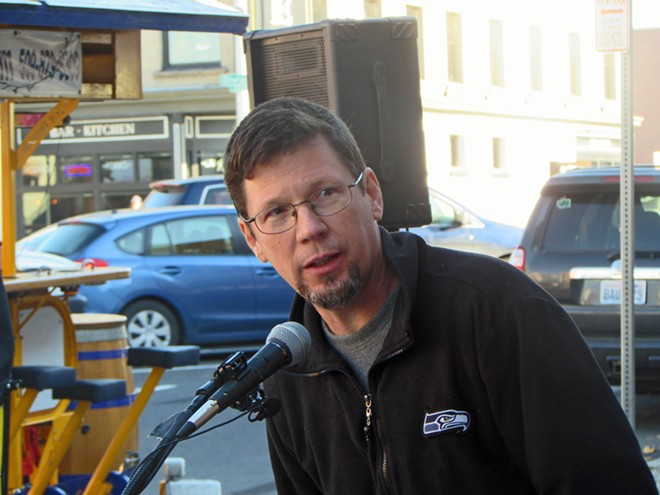 "If you picture this thing going all the way down to Monroe, it creates a very special way," Waite says. "The street configuration is very unique and it works. Garland is kind of heading this way. Very pedestrian-friendly. Hillyard would like to be this way."

And, no, this hasn't lessened his dreams of a two-way Main Ave.

"This can converge to two ways, any day we want to do it," Waite says. "East-west [Downtown] should all be two-way streets, slowed down."

Election anxiety, a soothing playlist and the mystical powers of eggs

Baumgartner calls for WSU regents to reinstate Barber, says "If you don't fix this, I goddamn will."