THIS WEEKEND IN MUSIC: You're the one that we want, Olivia Newton-John, plus Tyrone Wells and Dry and Dusty

Tyrone Wells is back in his hometown to sing as many songs as possible.

FRIDAY
Tonight, Tyrone Wells returns to the Bartlett for a sold-out show. This time the singer-songwriter, raised in Spokane, has carefully crafted a set full of tunes from nearly all of his previous solo records, including his most recent covers album. As he told the Inlander last week, "I'm not playing in stadiums, I'm playing small rooms, and people take time out of their lives and come to experience something I created in my living room or bedroom. I don't take that for granted. It's humbling." Read the full story right here.

The Inlander's Winter Party kicks off tonight at the Spokane Convention Center. Not only will the event get you situated for the upcoming ski and snowboarding season with the Snowlander Expo, but there's also a live music stage to keep you movin'. Don't forget about the Powderkeg Brewfest either! Tonight's music lineup starts at 4 pm and includes Cruxie, Nate Greenburg, Carli Osika, while Saturday's lineup is Marco Polo Collective, Haley Young, Ron Greene and starts at 3 pm.

SATURDAY
Sister-act Dry and Dusty is back in Spokane for a while and making sweet, old-time music at the KYRS Silent Auction Gala Saturday night at Hamilton Studio. Expect a mix of traditional tunes along with their own lovelorn songs. The event starts at 7 pm and is $25. Read our interview with the Jablonsky sisters right here.

Formerly of Toad the Wet Sprocket, singer-guitarist Glen Phillips is now doing the solo thing and Saturday he comes to the Bartlett stage. His latest record, Swallowed by the New, features sparse arrangements that should translate perfectly in the 150-person capacity space. The show starts at 9 pm and is $18 at the door.

A frequent flyer of Spokane, rapper Rittz is often found touring with the likes of Tech n9ne and Yelawolf, but Saturday night he headlines his own show at the Pin! Openers include Jerren Benton, Diz Dean, Krown Royal, CCB Krew and Disk Jockey F3lon. The show starts at 8 pm and is $25.

SUNDAY
After more than 40 years, fans are still hopelessly devoted to Olivia Newton-John. And this Sunday, the singer-songwriter and Australian actress brings her Grammy Award-winning tunes, Grease highlights and gravitas to Northern Quest Resort & Casino. The show starts at 7:30 pm and tickets start at $65.

Check out a bunch of other awesome weekend events right here. 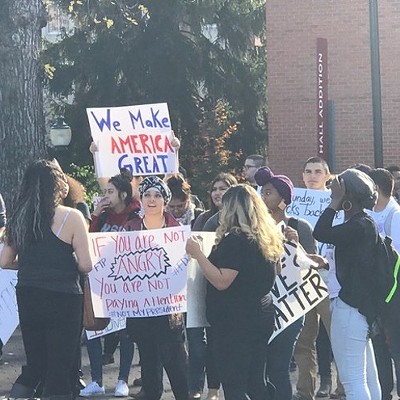 Protests and racist graffiti in the wake of Trump's election, Hutto charged with murder, and other news to start your day

Why are so many first-graders being suspended in Spokane Public Schools?