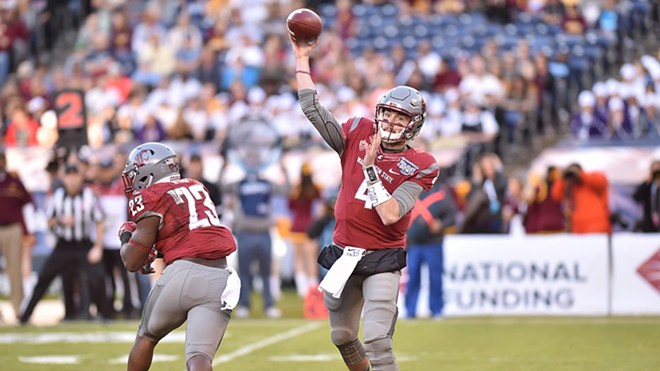 Cougs flail in San Diego
Washington State had seemingly every advantage heading into its Holiday Bowl matchup against Minnesota. The Gophers team was embroiled in controversy leading up to the game, with 10 players being suspended for sexual assault allegations, and the rest of the team briefly boycotting all football activities leading up to the game in protest. But what looked to everyone like smooth sailing for the Cougs — they were 10-point favorites going into the game — turned into a debacle and a boring as hell 17-12 loss that will surely have WSU coach Mike Leach staring wistfully into his collection of pirate memorabilia for a while.

Not in the holiday spirit
A worker at Main Market in downtown Spokane was sexually assaulted by a customer earlier this month, fighting him off with a broom handle. Police arrested Jason A. Harbine in the case. (Spokesman-Review)

Adolescent rape case
A 13-year-old boy stands accuses of raping a 10-year-old girl after both children ran away from a group home in Indian Trail and stayed at an abandoned house nearby. (KREM)

Two-state solution in peril
While president-elect Trump tweets about how he'll help Israel come Jan. 20, outgoing Secretary of State John Kerry warns that hopes for a "two-state solution" where both Israelis and Palestineans peacefully coexist in contested lands on Israel's West Bank is in peril. The region is suddenly back in the news after a U.N. vote to condemn Israeli settlements on the West Bank. (CNN)

No way!
Russia is no longer contesting allegations that the country has a doping program to help its Olympic athletes. This comes as a surprise to virtually no one who pays any attention to Olympic sports. Or Russia. Or doping. (New York Times)

Trump being Trump
In addition to filling administration positions and occasionally getting a security briefing while he chills in Florida for the holidays, president-elect Trump took to Twitter this morning to whine about Obama putting up roadblocks to a smooth transition. This despite much evidence to the contrary. In semi-related news, Obama trumped Trump in a Gallup poll to determine "America's Most-Admired Man."

R.I.P. Carrie Fisher
She rocketed to fame in Star Wars, and went on to inspire people everywhere with her humor and honesty addressing addiction and mental-health issues. Carrie Fisher died Tuesday after an apparent heart attack over the weekend.