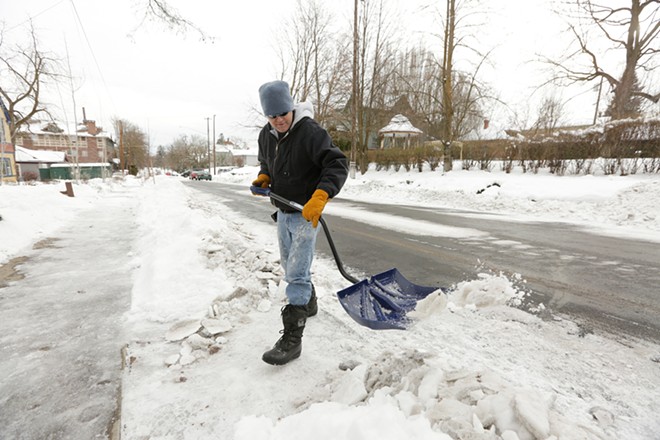 It's a snow day for Spokane schools, and many other districts in the region.
ON INLANDER.COM

WHAT'S UP: Learn to make the perfect roasted chili salmon, check out the touring Broadway show Pippin, and spend An Evening with Viggo Mortensen.

FIRST FRIDAY: The official First Friday monthly arts walk event has been moved to this Friday, Jan. 13 because of the recent holidays, so check out all the First Friday venue and artist info in this week's paper (on stands Jan. 12) or our permanent First Friday event page: inlander.com/firstfriday.

School's out, for today Spokane Public Schools have canceled classes for the first time this school year after road conditions worsened with anywhere from 2.9 to 4 inches of snow from Sunday alone. (Spokesman-Review)

Streep vs. Trump more interesting than actual Golden Globes
Politics creeped into the Golden Globes once again on Sunday night when actress Meryl Streep called out President-Elect Donald J. Trump for mocking a disabled reporter in 2015. Though she never mentioned Trump's name during her lifetime achievement award acceptance speech, it was abundantly clear she was talking about "the person asking to sit in the most respected seat in our country."

Trump, of course, fired back in another 3 a.m. Twitter session, calling Streep "one of the most over-rated actresses in Hollywood" and a "Hillary Flunky," and claimed that he was showing the disabled reporter "groveling" rather than impersonating him, though video and multiple news outlets show him doing so. (CNN/Washington Post)

Fort Lauderdale shooter may face death penalty
Fort Lauderdale shooting suspect Esteban Santiago, who killed five people and wounded six after he began firing in the baggage claim area of Fort Lauderdale’s airport Friday afternoon, will appear in federal court. Law enforcement officials have not yet identified a motive for the shooting, but say Santiago showed up at an FBI office in Anchorage claiming he was hearing voices, some of which told him to join ISIS. Officials also say Santiago, who was taken into custody without incident, declared the firearm as part of his luggage for his flight to Florida from Alaska and likely acted alone. (CNN)

Seahawks roll
The Seattle Seahawks beat the Detroit Lions 26–6 on Saturday night, manhandling the Lions with a dominant running game and solid D, as the Seahawks are wont to do. The win sends Seattle to Atlanta for a showdown Saturday against the Falcons. (ESPN)